User-defined shared memory areas can be created to store data. These areas can be used to save catalog information and shopping cart-related data.

MEMORY MODULE OF AN APPLICATION SERVER 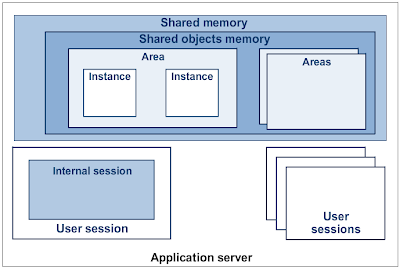 With the introduction of shared objects, the concept of the shared memory is extended to the shared objects memory. Initially, data exchange between the program and the memory in a user session used import and export parameters. This new concept makes use of instances to store and retrieve information in shared memory areas. 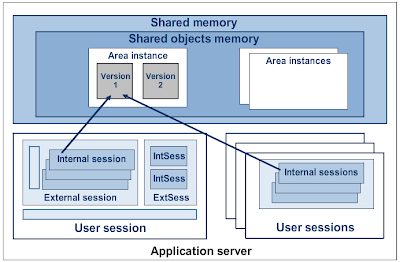 Data is saved in the form of attributes of objects.

Memory bottlenecks which cause runtime errors must be resolved. 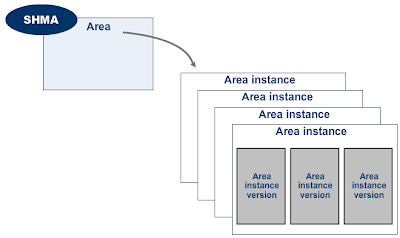 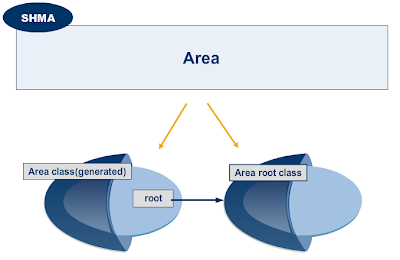 In ABAP, shared memory area can be created using transaction SHMA. When you specify an area name, a global final area class with the same name is created. The generated area class is a subclass of the area root class. 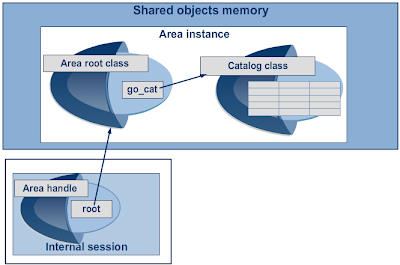 Let us create a flight catalog class for flight bookings. For this, we need an area handle instance, area root class, and a catalog class. 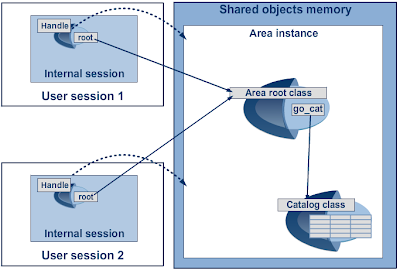 In this slide, two different applications running in different user sessions are trying to access objects in the same area. The prerequisites needed for the example application area are

a program which creates an area instance, and

a program to read data from the area. 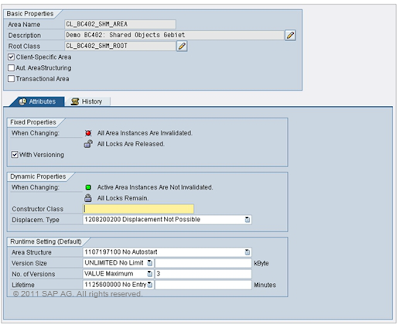 When you are in the process of creating an area or managing an existing area, the screen shown here appears. Area root class must be assigned to each area. An area instance version must contain at least one instance of the area root class as its root object.

BEFORE CREATING AN AREA INSTANCE 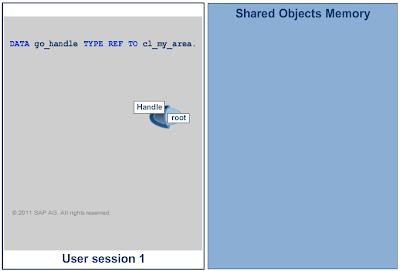 When you create an area using the transaction SHMA, a global final class with the same name is automatically created. In order to create a new area or access an existing area, a reference variable that is typed with the generated area class is required. The area can be accessed using this reference as a handle. 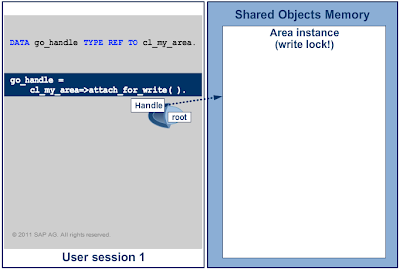 When an area class is instantiated, an instance is created in the memory. Here, go_handle acts as a handle for the area instance. 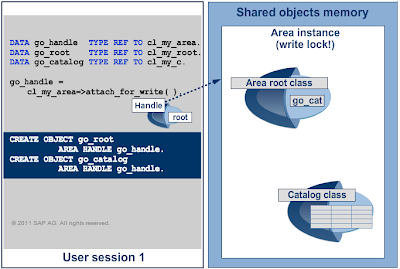 As shown here, the AREA HANDLE addition is used in the CREATE OBJECT statement to create an object in the shared objects memory. Henceforth, the area handle is used to perform any operations on the area. 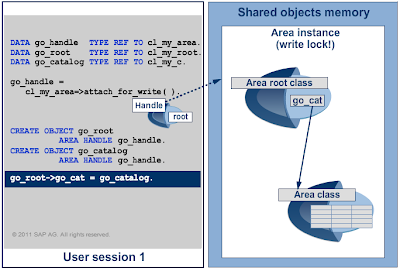 Here, the objects, go_root and go_catalog, are instantiated from the main program. The root object, go_cat, can also be instantiated here. 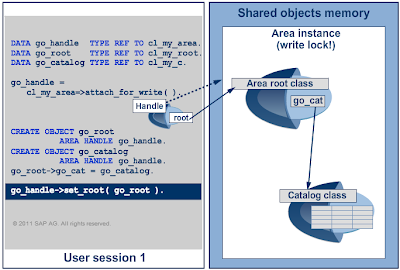 You can make use of the set_root method to assign the root object to the root of the area handle. After this assignment, any program can access the objects contained in this area by passing a reference to the area instance. 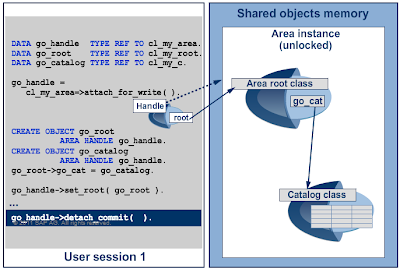 Objects contained in an area can be read only when the write lock associated with the object instance is released. The method, detach_commit, is used to release the write lock. 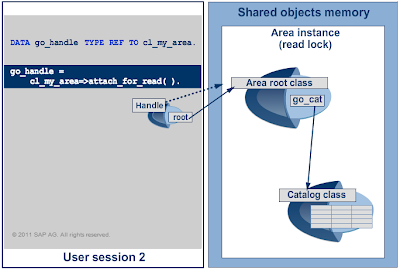 The read program requires a handle of the area instance to access an already existing area application. The method, attach_for_read, can be used to do so. 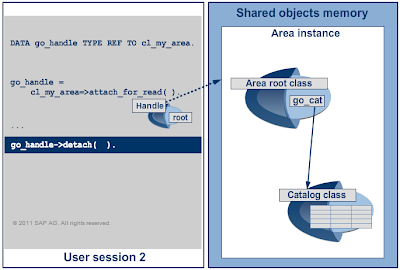 Once the read operation is complete, the read lock associated with the area instance is released using the detach method. However, the read lock is automatically released once the internal session is closed.

SETTING A READ LOCK ON THE ACTIVE VERSION 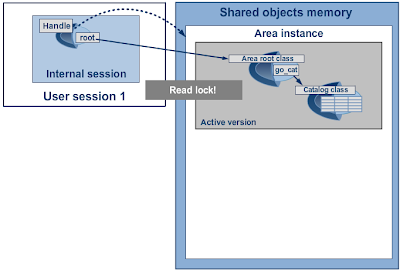 Once an area instance is created, the commit method is called internally. This activates the area instance version and the read lock is automatically applied.

VERSION BEING SET UP 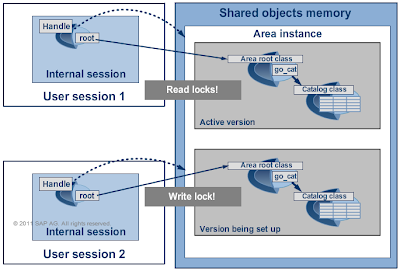 A new version of an area instance can be added if the Number of Versions attribute is set for the area. When the change lock is set for an area instance, a “version being set up” gets created and can coexist along with all the previously existing ones. 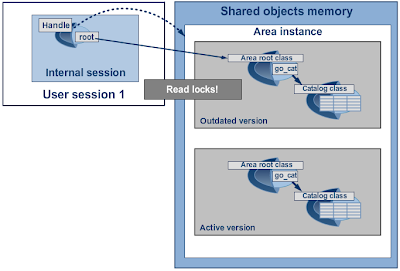 If the set-up of the new version is final when the area instance is in the read lock mode, then the newly added version becomes the active version. The earlier existing version automatically becomes outdated. 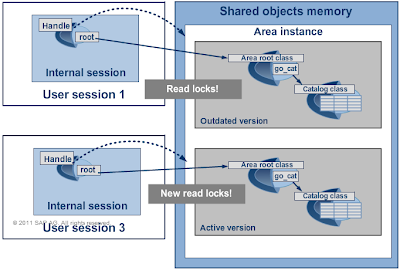 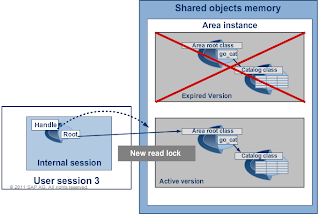 Once the read lock is set up on an active version, the read lock associated with the outdated version is removed and the version expires. 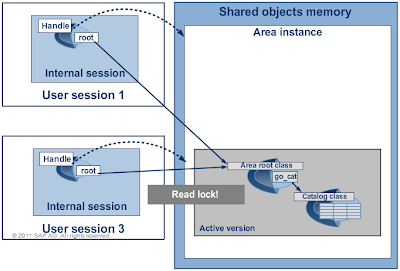 Any number of read locks can be set for the active version. However, an area instance can have only one active version at a time.
Posted by Fachreza R at 12:44 AM