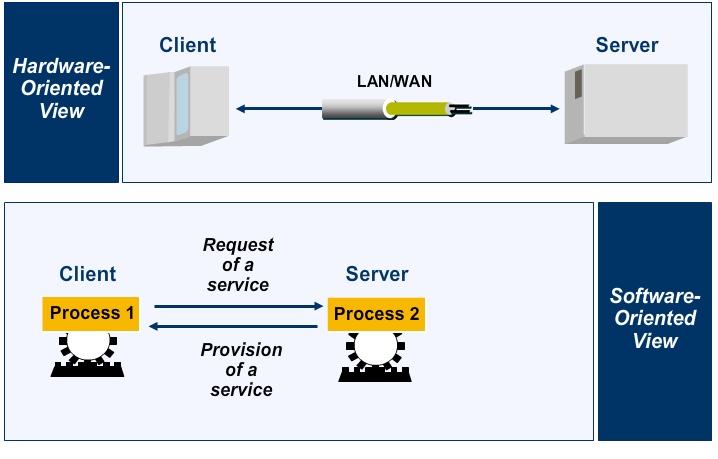 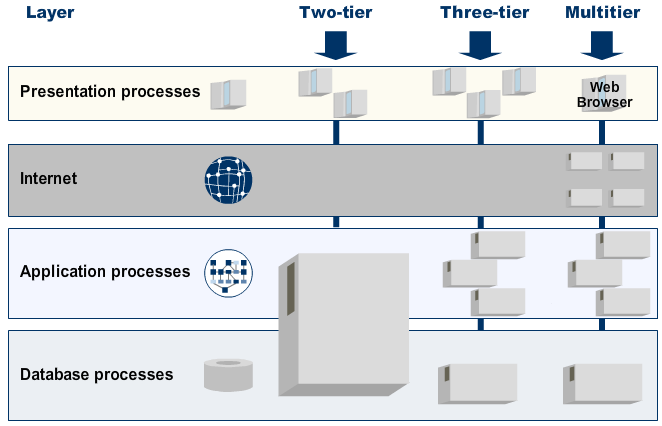 The processes often used for operating business application software are

database processes (for managing and organizing database data).
To configure an SAP system, you will have to distribute the required processes among the available hardware. You can have single-tier or multitier configurations, depending on the number of hardware layers.
In single-tier configurations, one single computer performs all the processes (database, application, and presentation). This is known as classic mainframe processing. It is generally used for tests and demonstrations.
Sometimes you need special presentation servers that are responsible solely for formatting the graphical interface. In this case, a two-tier configuration is implemented. This can cover a significantly higher number of users with its distributed presentation processes.
In a three-tier configuration, each layer runs on its own host. You can use many application servers to simultaneously work with the data of a database server.
For more complex client or server configurations comprising more than three tiers, you may have to implement a multitier configuration. You can add an additional level, which could be a Web server.

INSTANCE OF AN SAP SYSTEM 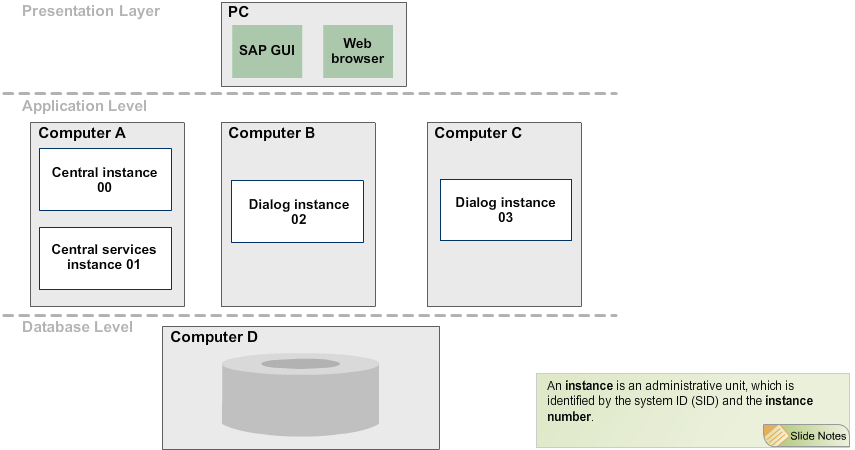 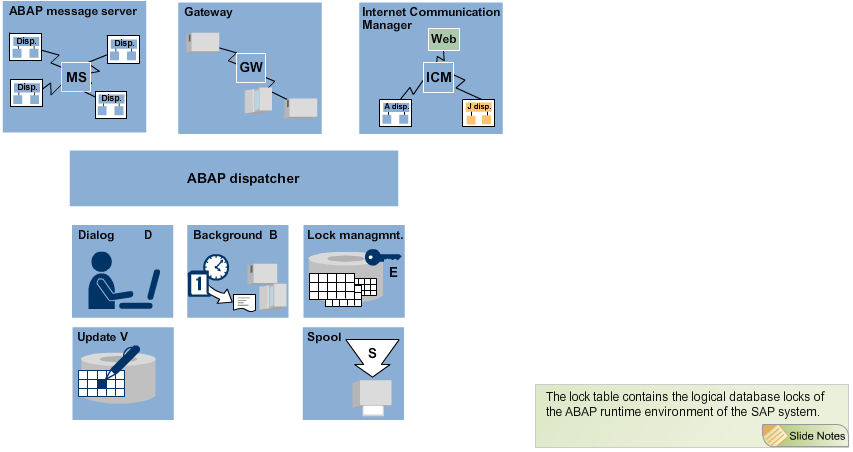 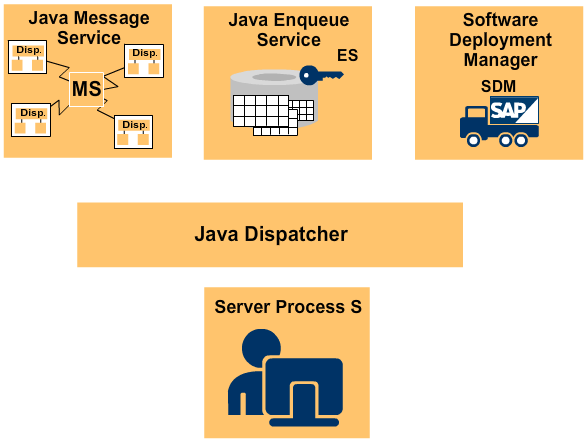 POSSIBLE TYPES OF SAP NETWEAVER AS 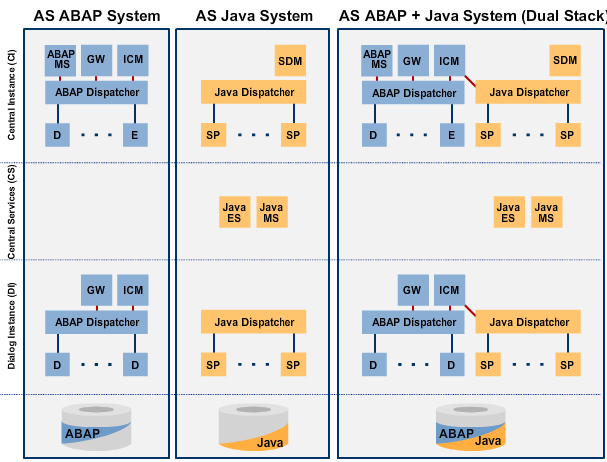 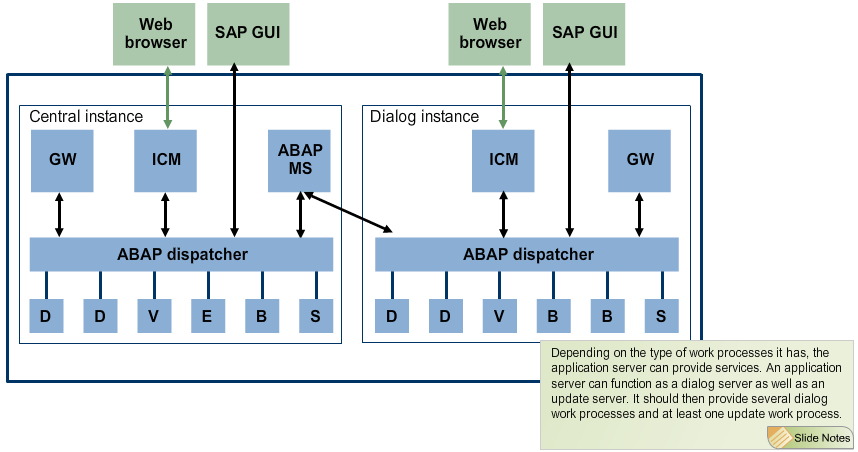 The Message Server provides information on which instances of the system are currently available. The ABAP dispatchers of the individual application servers communicate through the ABAP message server – one per SAP system. You can log on to the AS ABAP either through the SAP GUI for Windows or the SAP GUI for Java using logon groups. The message server then performs a load distribution of users to the available instances. After the load distribution, the SAP GUI communicates directly with the dispatcher. You remain logged on to this instance until you log off again.
If you use Web protocols such as HTTP for accessing the AS ABAP, the ICM receives the request. The ICM forwards the request to the dispatcher of its instance. The Gateway Reader (GW) accepts communications from other SAP systems through Remote Function Call or RFC. 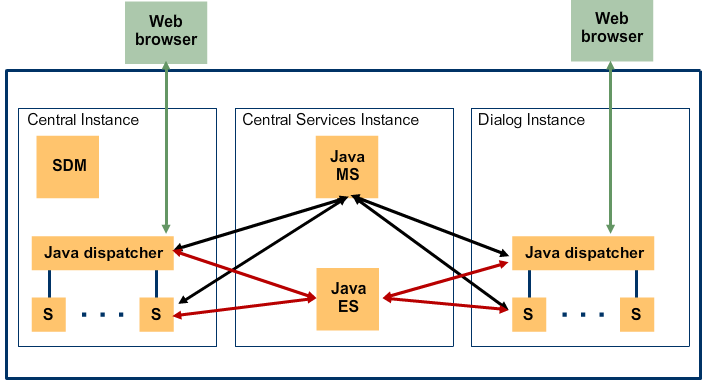 In AS Java, the central services like Message Service (MS) and Enqueue Service (ES) run in the Central Services Instance. All other instances of the system are usually called dialog instances. The Java MS provides a central message service for internal communication. The Java ES holds the logical locks. When the AS Java is accessed using a browser, the Java dispatcher receives the requests. The server processes then process these requests. 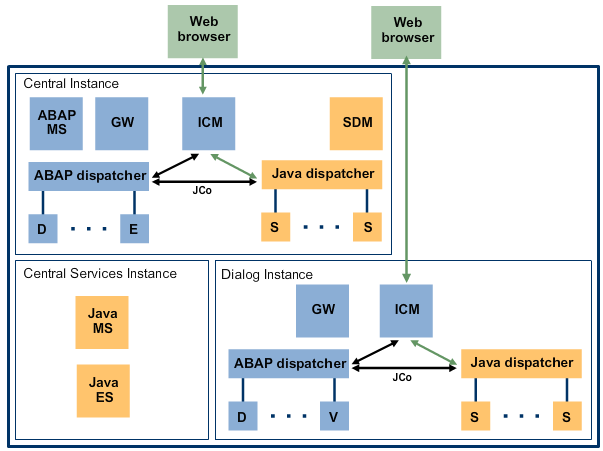 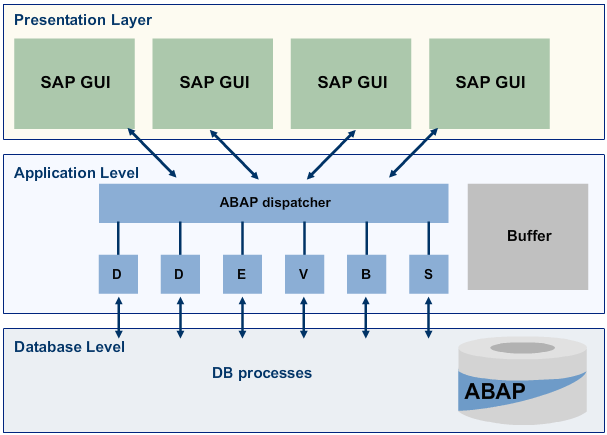 The processing of a user request in AS ABAP involves the presentation layer, the application layer, and the database layer. The screen entries of a user are accepted by the SAP GUI and are forwarded to AS ABAP. The ABAP dispatcher distributes the requests one by one to the available work processes for processing of data. You must read data from the ABAP schema of the database or write to it, to process user requests. The ABAP schema of the database has direct links with every work process. Once the process is complete, the dispatcher sends back the end result of the work process to the SAP GUI.
The buffers help to speed up the processing of user requests by reducing the number of database hits for data processing. Each instance has its own buffers. 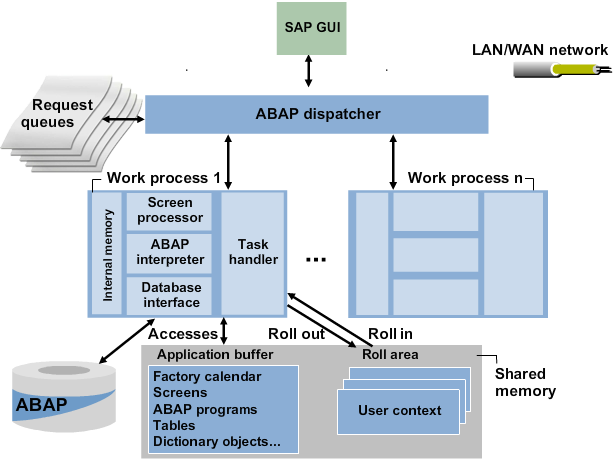 Application programs include process logic, which is executed by work processes.
A work process includes

a task handler that coordinates the actions within a work process;

a database interface.
The database interface translates the OPEN SQL statements from ABAP into the corresponding SQL statements for the specific database used (Native SQL). TheABAP interpreter executes the actual processing logic of ABAP application programs. The screen processor tells the ABAP processor which subprogram to execute, depending on the processing status of the screen flow logic.
The dialog work process is selected by the dispatcher. It involves a roll-in of the user context first. The work process then processes the user request. This may be a request for data from the database or from the buffers in the shared memory. The dialog work process processes the dialog step, after which the work process rolls out the user context back to the shared memory. The user sees the result after it has been transferred to the SAP GUI on the new screen. 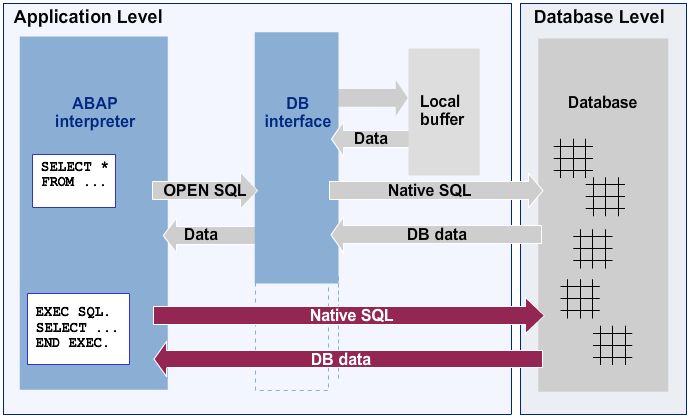 In ABAP, you can access the application data in the database using ABAP Open SQL (or Structured Query Language, which is a database query language), regardless of the Relational Database Management System (RDBMS) used. The database interface that interprets the OPEN SQL into Native SQL thus allows the programs to be database-independent. The buffer stores data that are frequently needed. Thus the system is spared the trouble of retrieving this data from the database. Furthermore, native SQL commands used directly in ABAP can fetch data. This eliminates the need for local buffers or interpretation of commands by a database interface. 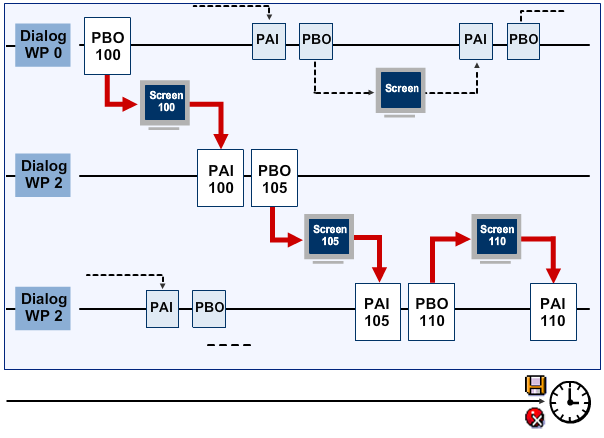 Transactions are processing units grouped to provide specific modules.
The four principal characteristics of transactions can be summed up in the acronym ACID:

Durable
An atomic transaction either succeeds fully or does not have any effects at all. This ensures that inconsistent, partial results are not stored.
A consistent transaction is one in which the system status always reflects one that is accurate and consistent in business terms and will not change otherwise.
Changes made within a transaction are isolated, as they cannot be seen by any other transaction, unless the confirmation Commit is executed.
The results of a transaction are durable because after the final confirmation they are stored permanently in the database. 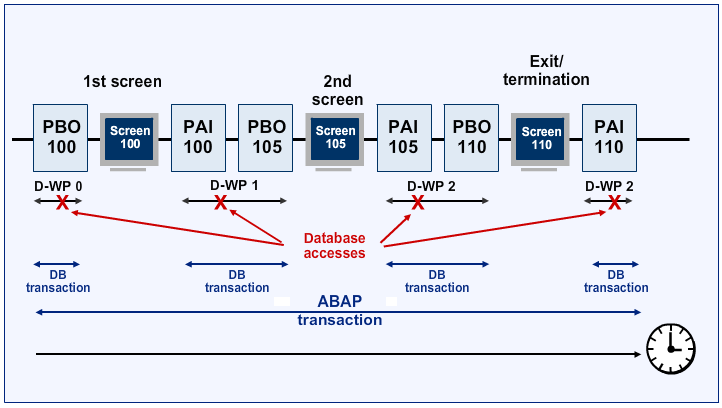 LOCK MANAGEMENT IN AS ABAP 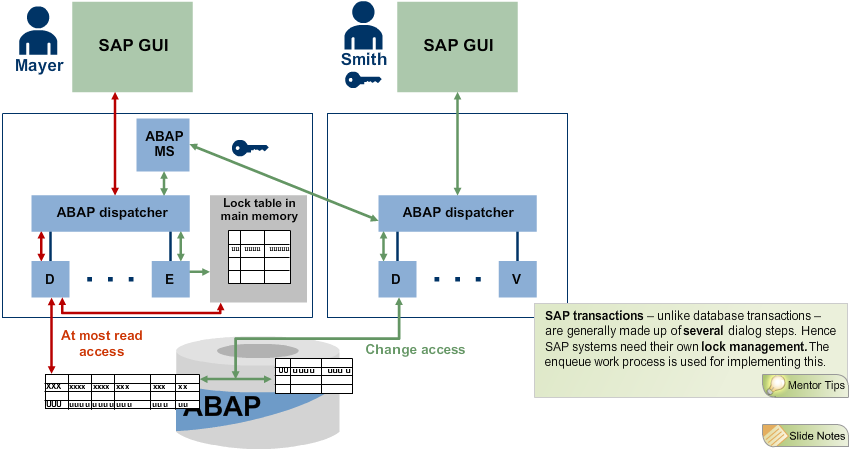 The SAP lock principle is that SAP programs should make lock entries in a lock table. The lock table is located in the main memory of the instance with the enqueue work process. If a user wants to change the access to data, the executing dialog work process requests a lock. A dialog request processed on the enqueue server results in a dialog work process that can access the lock table directly; else, the work processes communicate through the MS.
The application developer can choose between different lock modes, such as at most read access and change access.
The application developer can choose between various lock modes.

Write locks – in the lock mode Exclusive – can be edited only by one user.

Enhanced write locks – in the lock mode eXclusive noncumulative – allow write locks to be successively requested and released by the same transaction.

Optimistic locks – in the lock mode Optimistic – respond like read locks at first; can be changed to write locks; and can be set if the user displays the data in change mode.

THE PRINCIPLE OF ASYCHRONOUS UPDATES 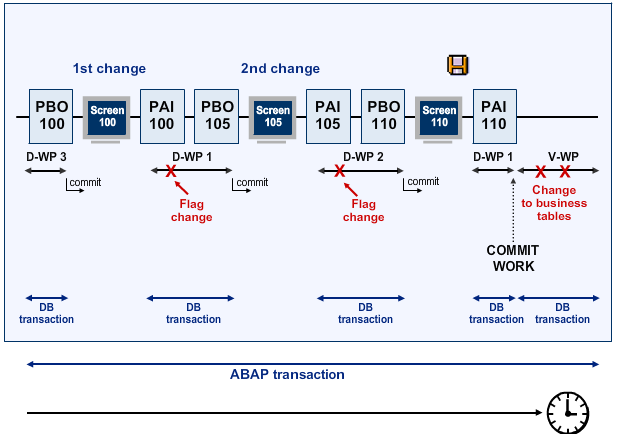 SAP transactions can off-load time-intensive database changes by using the updating system. During a dialog work process, the data temporarily stored for processing may be passed to an update work process for further processing. The dialog work process, in that case, does not wait for the update request to be completed. This type of update is asynchronous.
With the ABAP command COMMIT WORK, you complete the dialog part. Each dialog step corresponds to a database transaction, which is executed either completely or not at all in the database. It is duly completed with a COMMIT command. 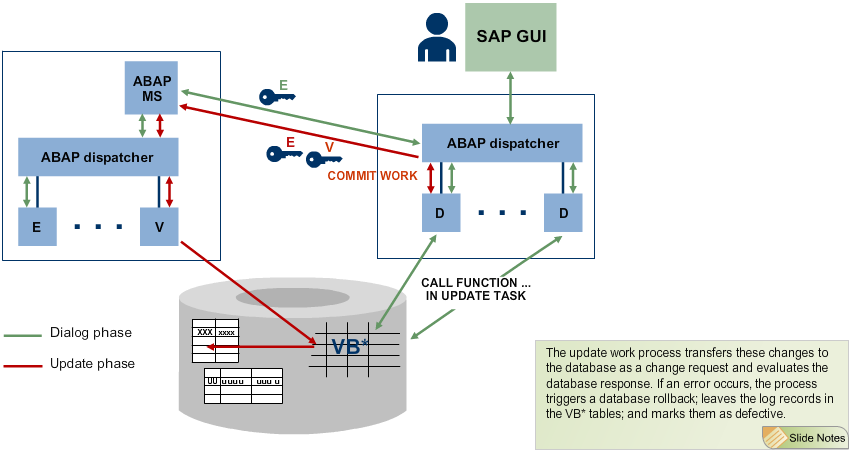 An asynchronous update process triggers several steps:
The program first locks the data record for other users by addressing the enqueue work process.
If the lock entry to the lock table is successful, the program passes the lock key to the user. The program then reads the record to be changed from the database
In the active dialog work process, the program calls a function module using CALL FUNCTION ... IN UPDATE TASK. It then writes the change request to database update tables. These are called VB* tables; they act as temporary memory; and store the data to be changed. Later on this data can be collected and written to the application tables in the database.
After the dialog part of the transaction ends, the program initiates the close of the transaction with the COMMIT WORK statement.
The update work process reads the log records that belong to this SAP transaction from the VB* tables. This is based on the information (key of the update order, lock key) transferred from the dialog work process.
The changes are marked and collected in the VB* tables.
The lock entries in the lock table must be reset.

PRINTING IN AS ABAP 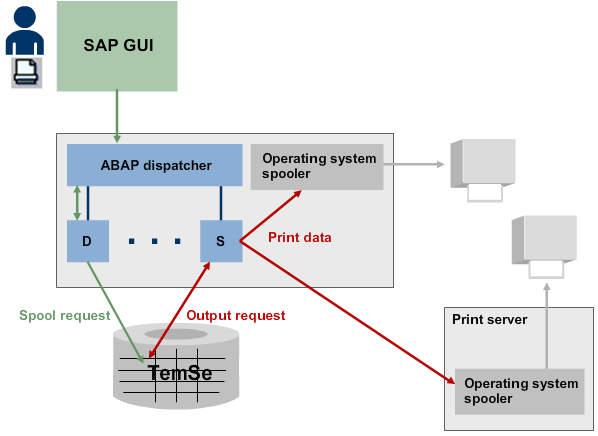 A spool request contains information on the output data requested; the formatting of this data; and the printer model used. The spool request is stored in the TemSe (temporary sequential file). A spool work process formats the data specified in the spool request and creates an output request. The data in the output request is in an appropriate format for the printer. You can pass on this data to an appropriate operating system spool process locally (on the same computer) or remotely (over a network connection). The operating system then performs all remaining tasks, such as queuing and data transfer to the selected printer. 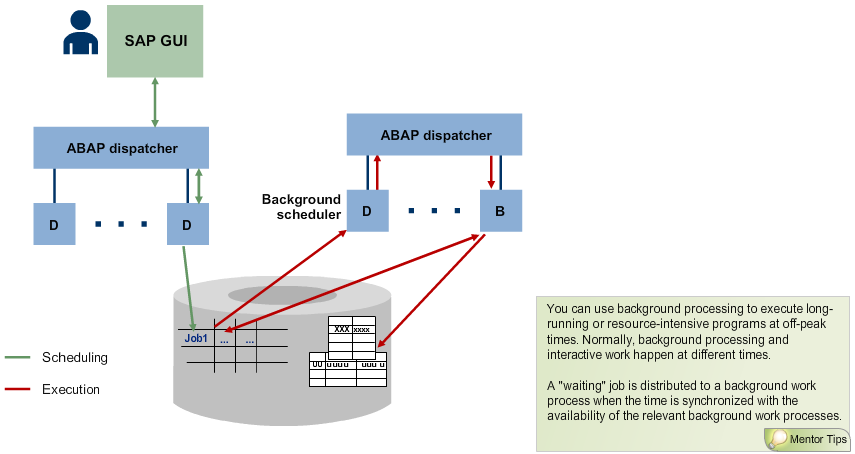 As an end user, you can schedule the program to be started in the background as a job from the application transaction. The job then “waits” for the planned execution time in the job scheduling table. This scheduling is facilitated by the background scheduler and the job is executed. 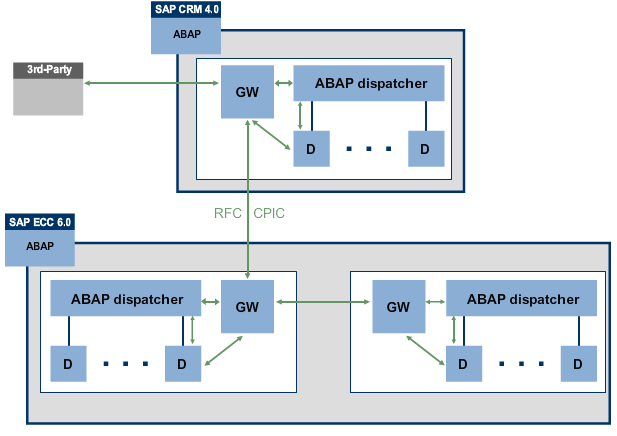 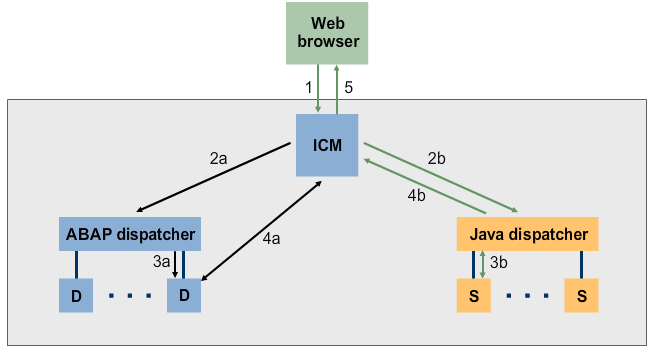 The Internet Communication Manager (ICM) receives Web requests. The ICM then uses the URL to decide where it should forward the request.
Any request to the Java runtime environment goes to the Java dispatcher (2b), which then forwards it to a Java server process (3b). The Java server process then refers to the Java schema of the database (if applicable) and sends the response back to the ICM using the Java dispatcher process. The ICM reroutes this response from the SAP system to the user who sent the request (5).
Any request to the ABAP runtime environment is forwarded by the ICM to the ABAP dispatcher (2a), which then handles it like a typical SAP GUI request and forwards it to the work process (3a).The relevant work process now communicates directly with the ICM (4a). The ICM forwards this response to the user who sent the request (5).
Posted by Fachreza R at 11:34 PM