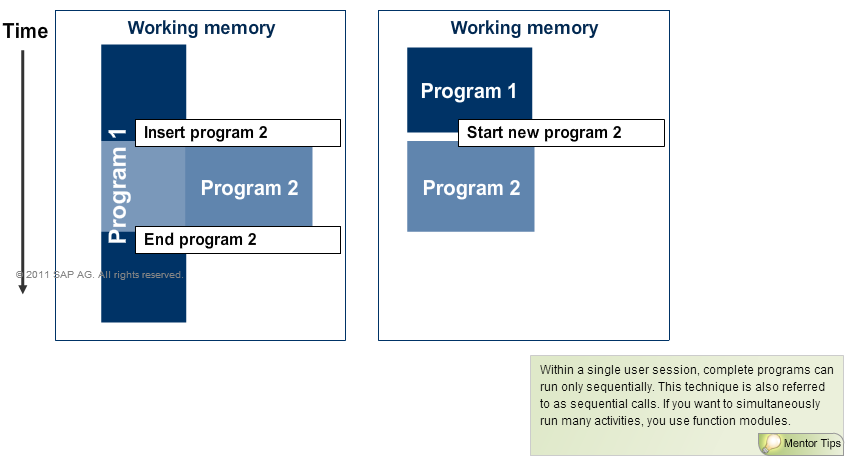 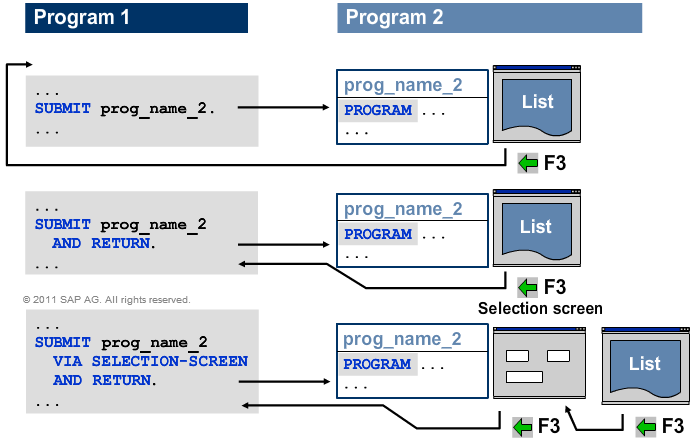 If you use VIA SELECTION-SCREEN, the standard selection screen of the called program (if any) is displayed.

If you use AND RETURN, the system resumes processing with the first statement of the calling program after the SUBMIT statement once the called program is finished. 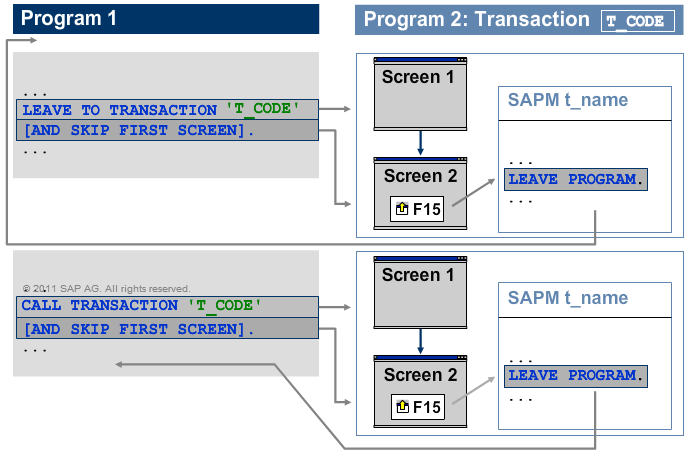 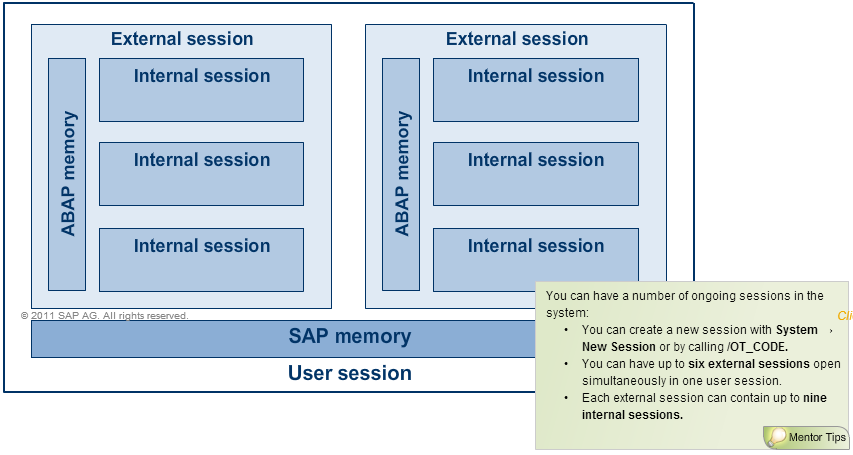 There is a distinction between internal and external sessions:

Generally, an external session corresponds to an SAP GUI window.

Each program that is started occupies its own internal session.


BEFORE INSERTING A PROGRAM 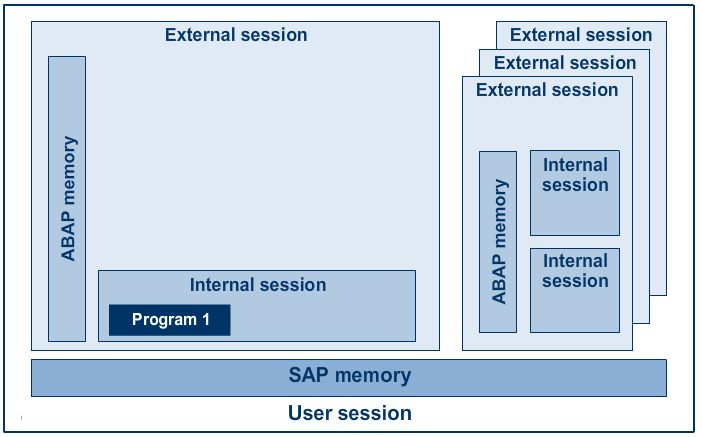 This slide illustrates how a stack inside an external session changes with various program calls. The starting point can be executed by a SUBMIT ... AND RETURN or CALL TRANSACTION statement within a program. 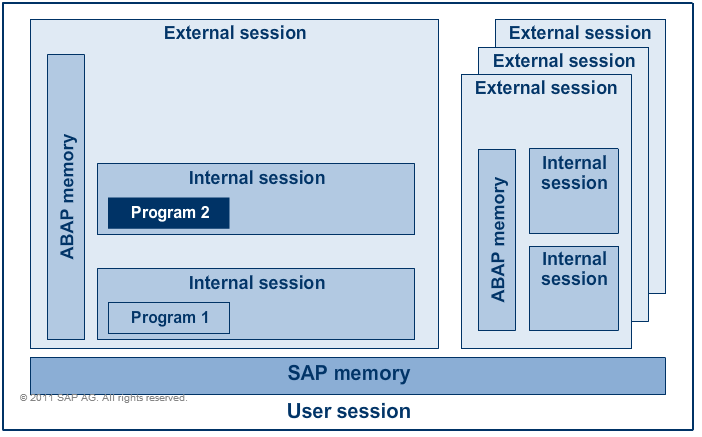 The system creates a new internal session containing the new program context whenever a program is inserted. The new session along with the program context of the calling program remains in the stack.

AFTER THE INSERTED PROGRAM ENDS 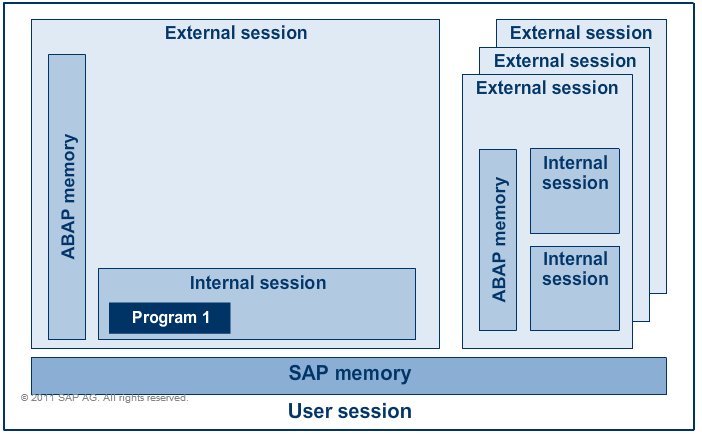 
BEFORE STARTING A NEW EXECUTABLE PROGRAM 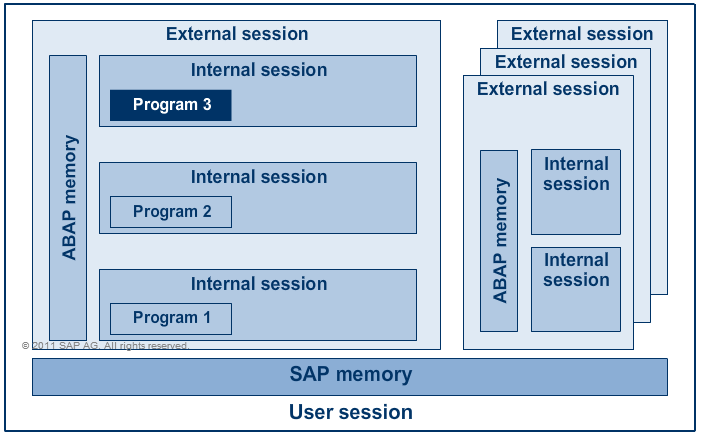 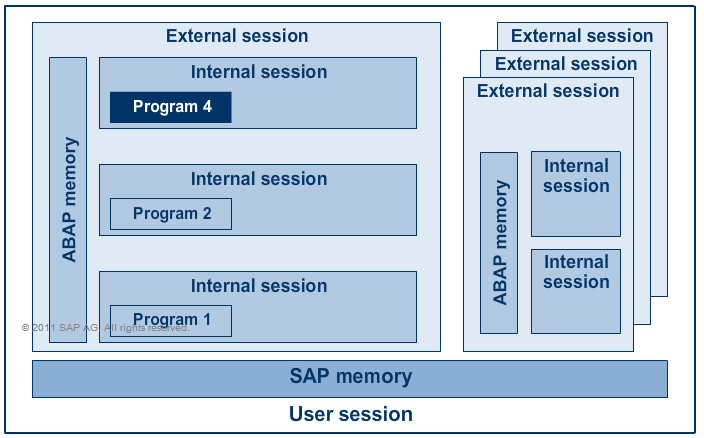 If you call an executable program using its program name, you automatically end the calling program. Therefore, the system destroys the internal session of the program that you are terminating, which is the top one from the stack. The system creates a new internal session in the stack, which contains the program context of the called program.
Program contexts created before are retained.


BEFORE STARTING A NEW TRANSACTION 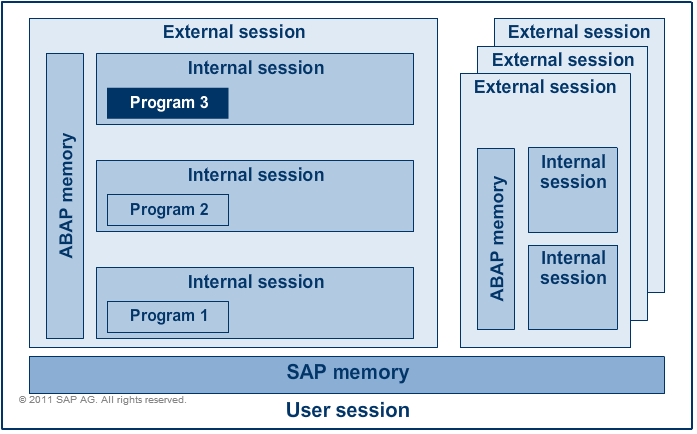 The starting point for a new transaction is the execution of a LEAVE TO TRANSACTION statement within a program. 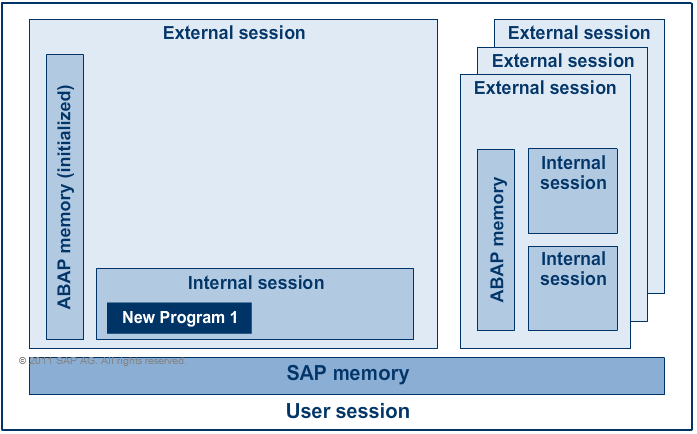 
PROGRAM GROUPS WITHIN AN INTERNAL SESSION 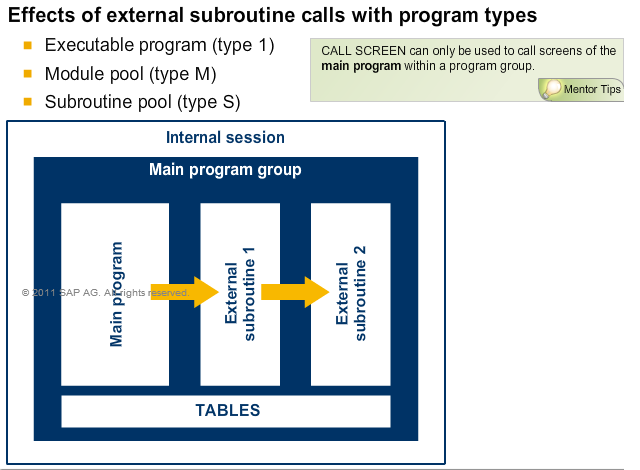 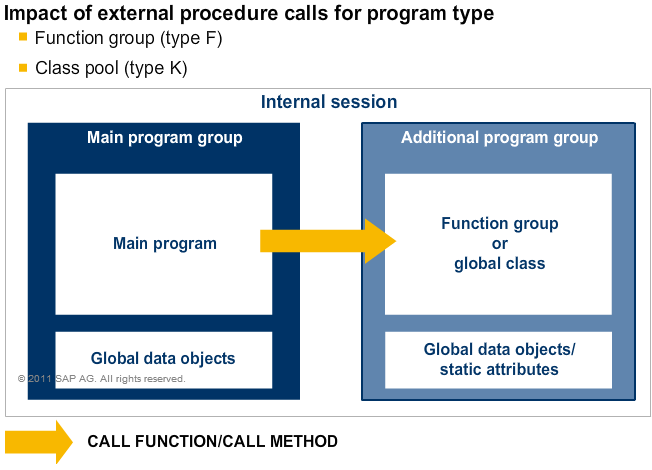 An additional program group is created when a function module or a method is called. This happens when neither the relevant function group nor the class definition is loaded. 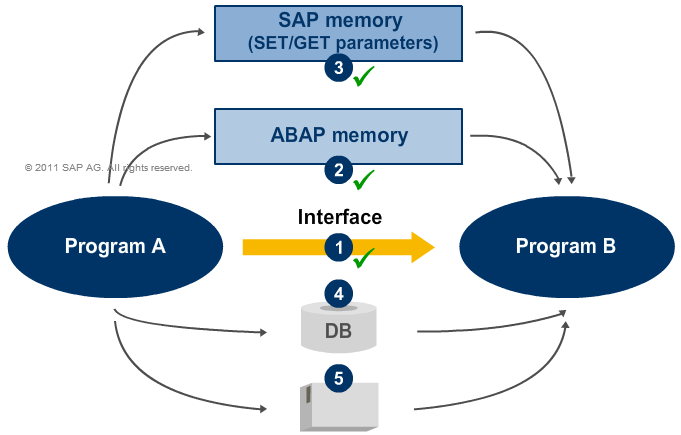 There are various ways of exchanging data between programs that are running in separate program contexts or internal sessions.
Some platform-independent methods can transfer data transiently:

By means of the ABAP memory

By means of local files on the presentation server 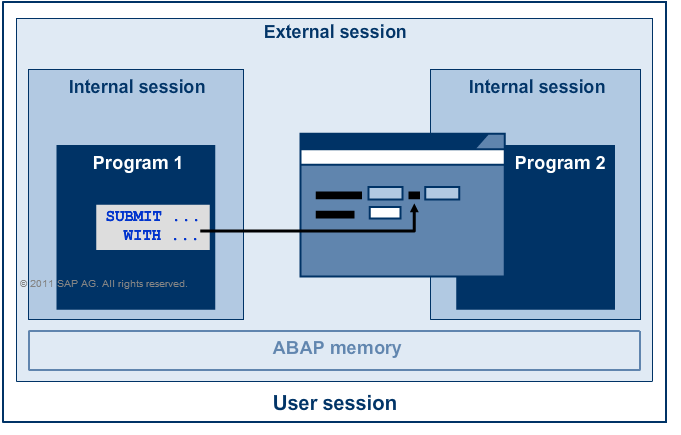 You can pass data for the input fields when ABAP programs with standard selection screen are called.
You can do so by specifying

a variant for the selection screen; or

specific values for the input fields. 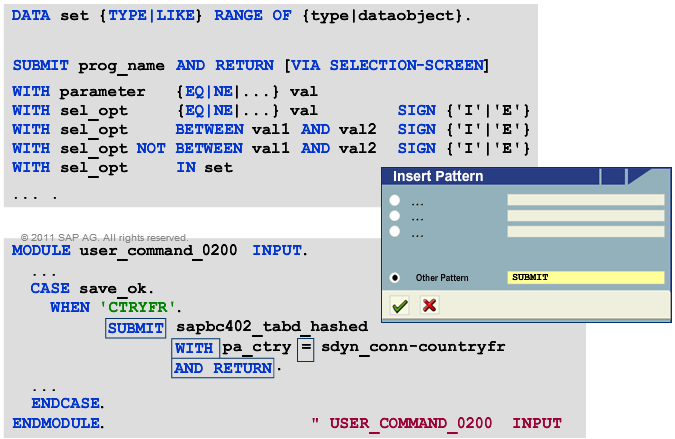 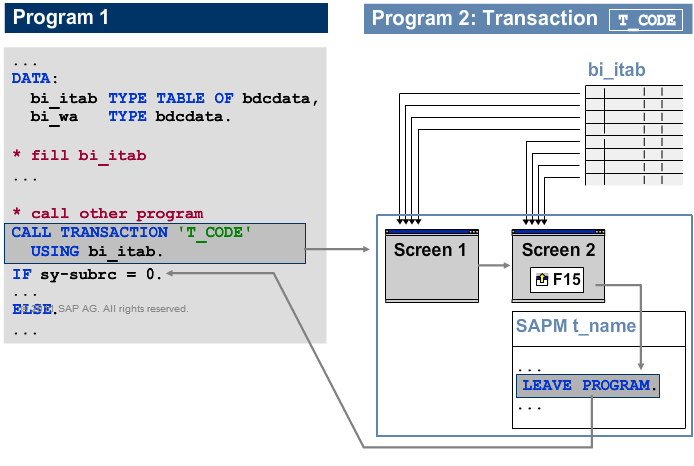 You can call a transaction using the CALL TRANSACTION 'T_CODE' USING bi_itab. This helps you access the values from the internal table bi_itab in the screen fields.
This internal table should have the structure BDCDATA. You fill it accordingly.
The return code (sy-subrc) tells you whether the transaction was executed successfully.


FIELDS IN THE GLOBAL TYPE BDCDATA

You can fill an internal table in the batch input format:

You identify each screen in a transaction by a line in which only the PROGRAM, DYNPRO, and DYNBEGIN fields are filled. Only then can you fill in the screens and process them automatically.

You also use a new BDCDATA record for each field you want to fill, after a record identifies the screen. These records use the FNAM and FVAL fields. 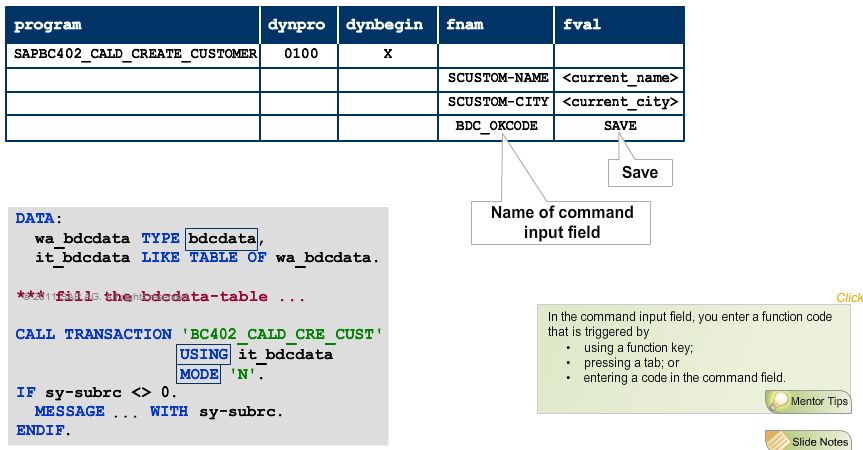 The program calls the transaction with the creation of a new customer entry.
If the operation is successful, the new customer record can be entered in the waiting list.
At runtime, you enter the customer name from the input field in CURRENT_NAME and the relevant city in CURRENT_CITY.
To address the command field, use BDC_OKCODE. 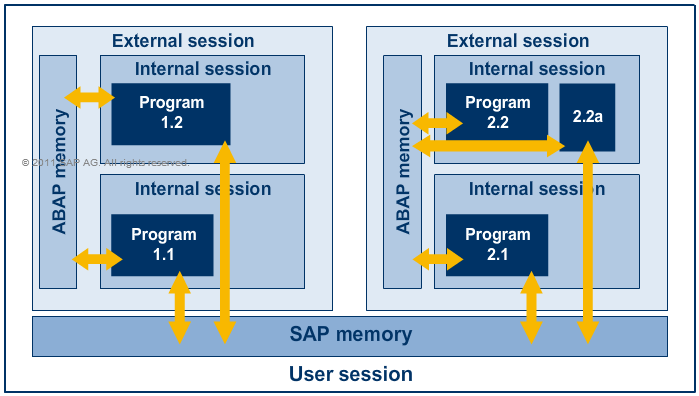 You can use both the SAP memory and the ABAP memory when you cannot always specify the data to be transferred between two programs:

The SAP memory is a user-specific memory area for storing field values.

It can be used between external sessions in the same user session.

All external sessions of a user session can access the SAP memory.

The ABAP memory is also user-specific.

There is a local ABAP memory for each external session. 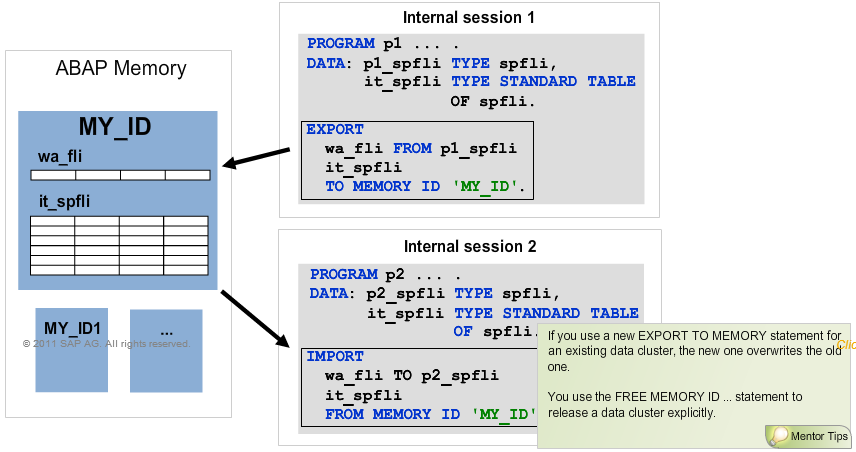 You use the EXPORT ... TO MEMORY statement to copy any number of ABAP data objects with their current values to a data cluster in the ABAP memory. With the ID addition, you can identify different clusters.
To copy data from ABAP memory to the corresponding fields of your ABAP program , you use the IMPORT ... FROM MEMORY ID ... statement.