TAW10 - INTRODUCTION TO THE ABAP WORKBENCH

THE CROSS-CLIENT CAPABILITY OF THE REPOSITORY 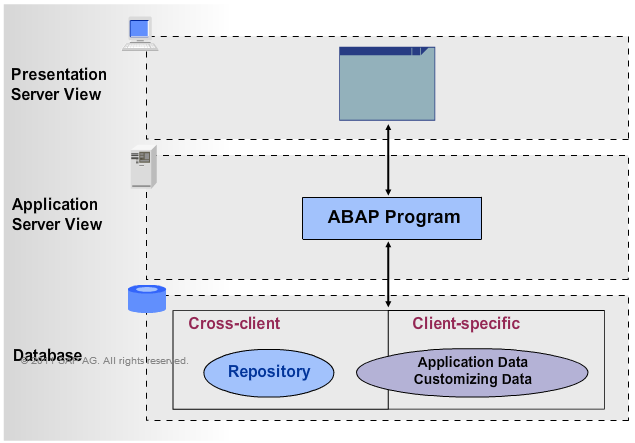 The Repository holds all system development objects, such as programs, function modules, and definitions of database tables. It is in the database; is alwaysindependent of the client; and thus its objects are accessible from any client.
The database not only comprises the Repository, but also contains application and Customizing data, which are normally client-dependent. In short, every data record is assigned to a particular client: only users who have logged on to that particular client can read it or change data in it.

STRUCTURE OF THE REPOSITORY 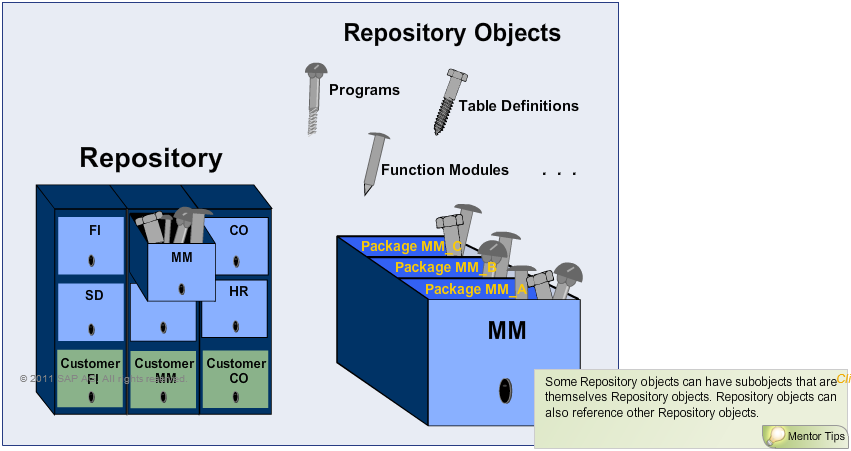 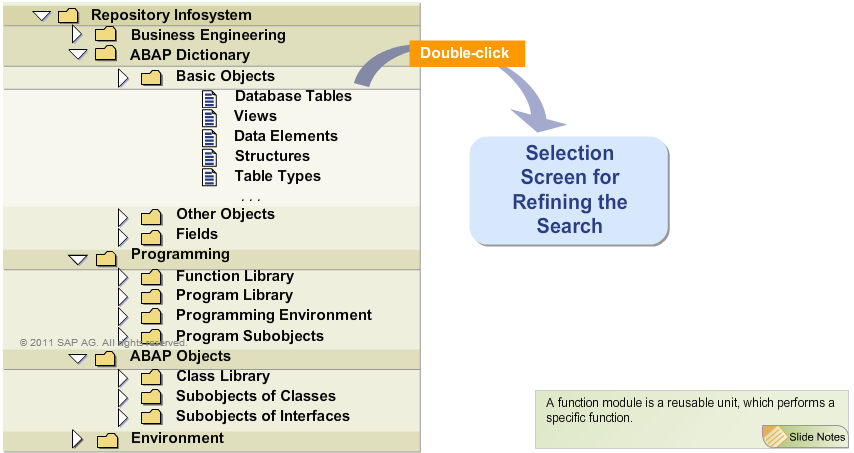 You might want to perform a random search of Repository objects; for example, all programs by a certain developer or all function modules that were changed after a certain date. You should access the Repository Information System from the SAP Easy Access Menu path:
Tools → ABAP Workbench → Overview → Information System.
When you double-click a certain object type, a selection screen appears allowing you to limit your search. 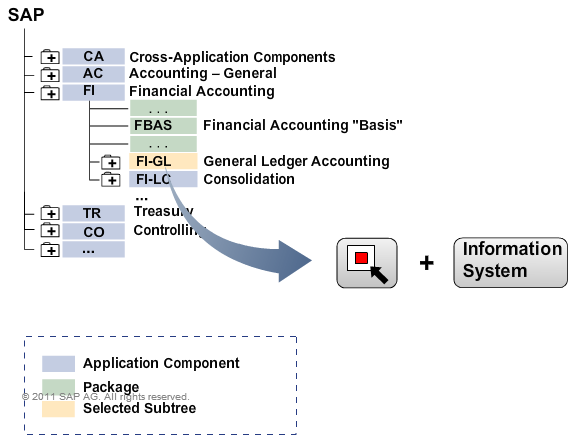 The SAP application hierarchy is used for the application-specific search of Repository objects. You can see these objects listed in a hierarchical tree structure. When you expand a component node, for example FI, you will see a display of all the packages that are assigned to that component (for example, FI-GL). Choose Select to specify the subtree; then navigate directly to the Repository Information System by clicking Information System. 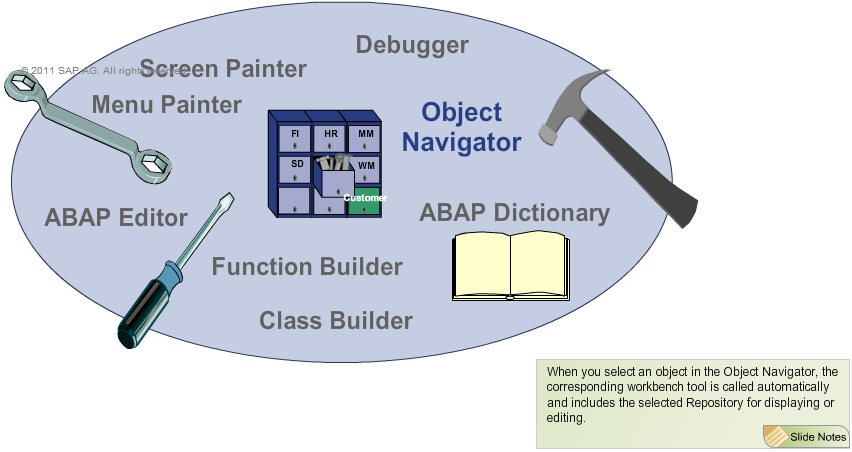 The ABAP Workbench includes all the tools required for creating and editing Repository objects.
These tools cover the entire software development cycle:

The ABAP Editor is used for editing the source code.

The ABAP Dictionary is needed when editing database table definitions, central data types, and so on.

The Screen Painter helps configure screens (together with functions for user dialogs).

The Function Builder is used for maintaining function modules.

The Class Builder is used for maintaining global classes and interfaces.

The ABAP Debugger is used to locate semantic errors in your program and also to analyze program flows.
The Object Navigator is a central development tool where you can have the requested Repository objects listed.

SCREEN LAYOUT IN THE OBJECT NAVIGATOR 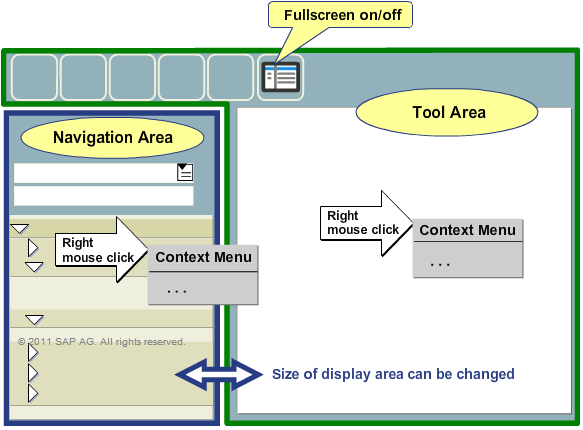 The Object Navigator screen can be split into a navigation area for displaying a hierarchical object list and a tool area for displaying and editing a development object using the appropriate tool.
You can display or hide the navigation area with the Full screen on/off option.
The context menu helps you to choose only those functions that are designed for the respective object.

WORKING WITH THE NAVIGATION AREA 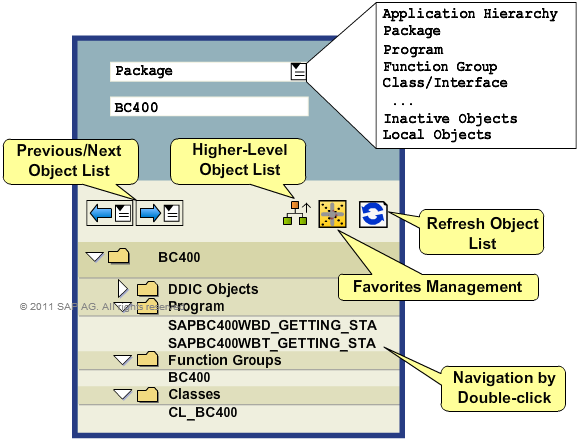 If you choose to display a package in the navigation area, then all of the Repository objects belonging to this package are listed. You can double-click a listed object to display or edit it.
You can also navigate between the object lists that were previously displayed in the current Object Navigator session.
You can add frequently used object lists to your favorites.
You can also display the list of higher-level objects. The refresh option helps you to refresh the object list.

FUNCTIONS IN THE TOOL AREA 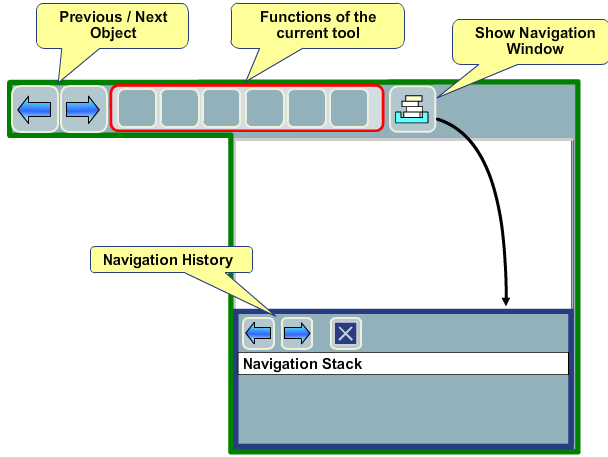 In the tool area a Repository object is displayed in the corresponding tool.
You can also navigate between the objects that were previously displayed in the current Object Navigator session (blue arrows).
You can display a subwindow with the previous navigation history. You then double-click an object in the navigation history to display it in the tool area.

SYNCHRONIZING THE NAVIGATION AND TOOL AREAS 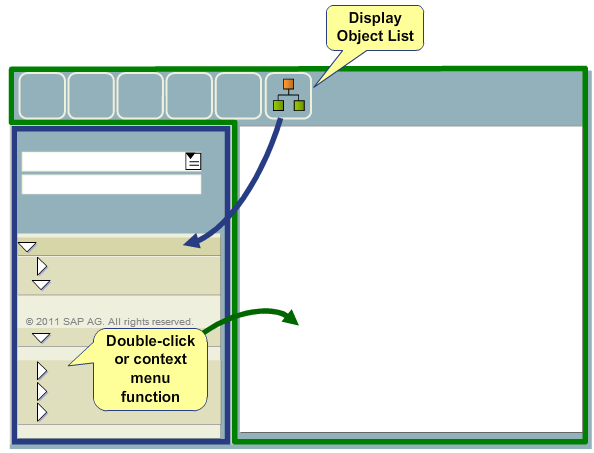 You can display an object in the tool area either by double-clicking in the navigation area or by using the corresponding context menu function of the object.

If you are currently editing an object in the tool area, you can display the object list of that object by choosing Display Object List. 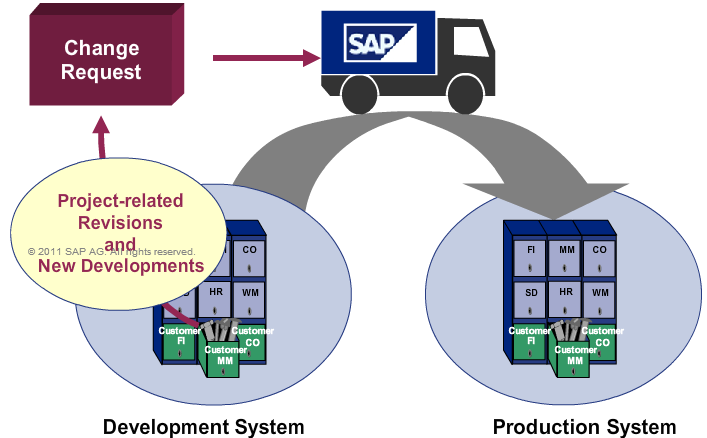 Development projects are carried out in a development system.
The project manager starts the development project by creating a change request, which includes the names of the assigned employees, in the Transport Organizer.
The Transport Organizer then creates a task for each project employee in the change request.
The employee who has to create or edit a development object assigns this to the change request and it is entered into the task of the employee.
The development objects that are edited or created in a project are then transported to the subsequent systems (test system, production system, or both) on project completion.

ORGANIZATION OF A DEVELOPMENT PROJECT IN THE CHANGE REQUEST 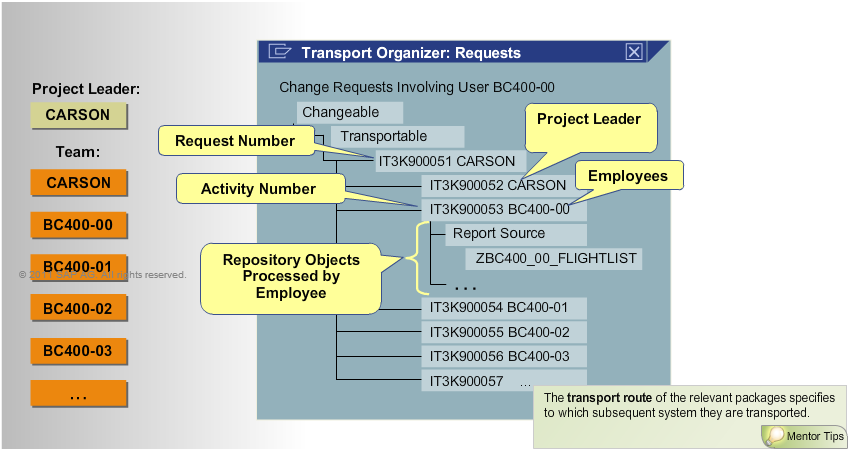 Individual employees can track and check their project-specific activities.

All the project employees can process the respective development objects. The Repository objects remain locked for developers who do not belong to the project team until the project is completed. 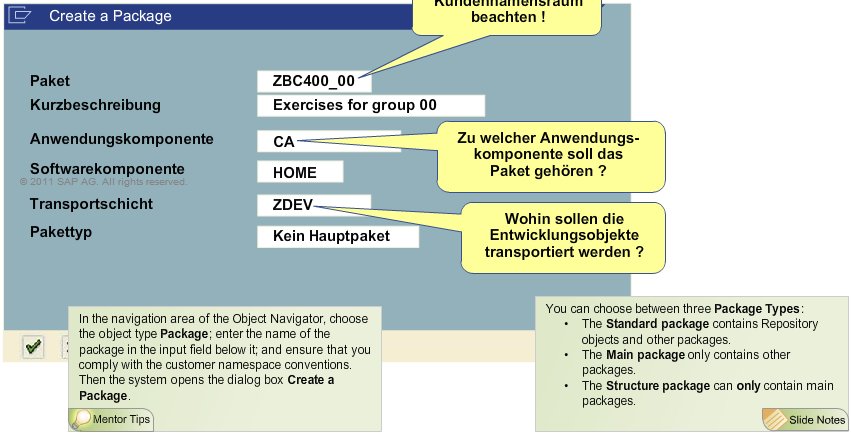 This slide depicts a dialog box for creating a package.
You can set various attributes for the package:

In the field Application Component, specify the location of the package within the application hierarchy.

In the field Software component for customer development, enter the value HOME.

In the Transport Layer you can determine whether the objects of this package are to be transported to a subsequent system and, if so, to which system.

You then have to assign the package to a change request. 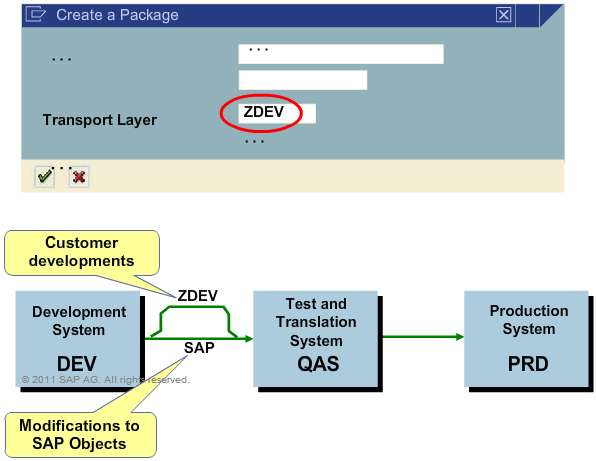 
ASSINGMENT TO A CHANGE REQUEST 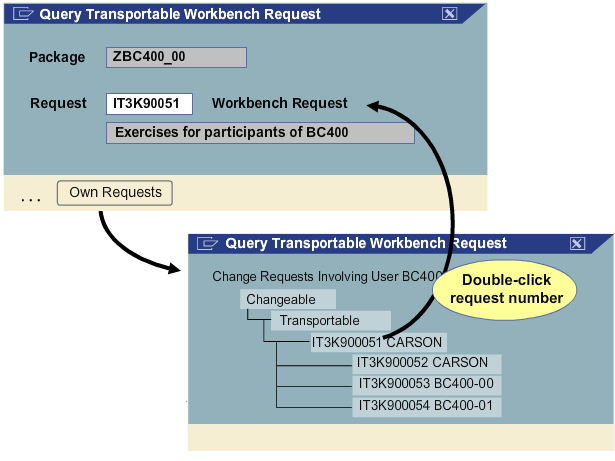 The package created must be assigned to a change request.
You can display all change requests in which you have a task using the My Tasks option. You can simply select the relevant request by double-clicking it. 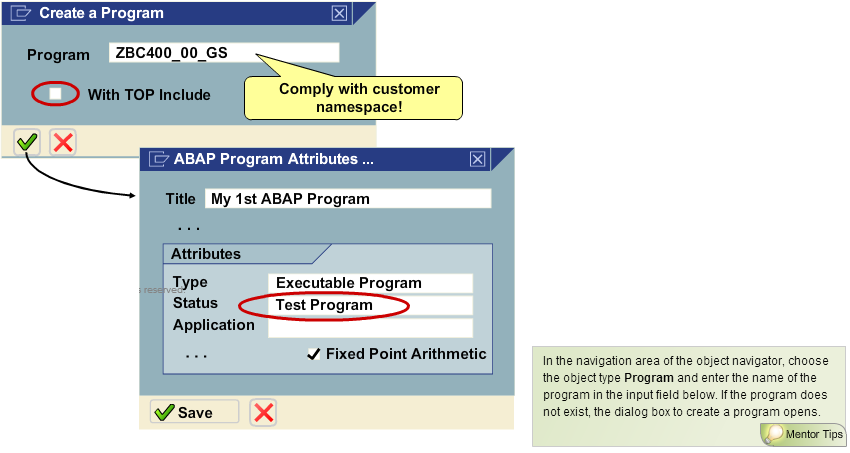 The screenshot shows you the dialog box that lets you create a program.
Make sure you comply with the customer namespace conventions.
In this training course, remove the flag for With TOP Include, otherwise the source code will get distributed to several programs.
Change the title to a self-explanatory short text and always choose Executable Program as the program type for this training course.
All other program attributes are optional.

The ABAP Programming Language is especially designed for dialog-based business applications. Type-specific processing of data is possible using type conversions and type casting. You can also develop multilanguage applications using translatable text elements. The Open SQL standard embedded in ABAP allows direct database accesses.
ABAP Objects is the object-oriented enhancement of the ABAP programming language.
The ABAP syntax is independent of the platform, the relational database system, and the operating system for the application and presentation server.
Applications implemented in ABAP can run in future releases. Hence, ABAP has upward compatibility. 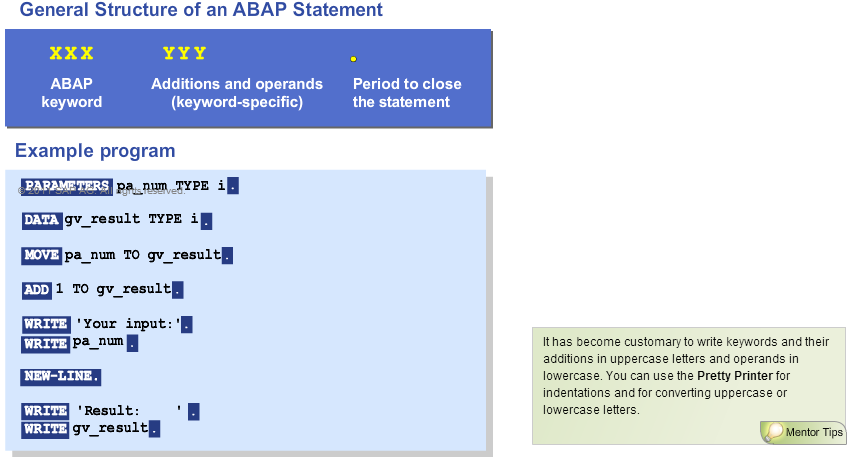 The first word in a statement is called an ABAP keyword.

Each statement ends with a period.

Words must always be separated by at least one space.

You can indent statements as you wish.

With keywords, additions, and operands, the ABAP runtime system does not differentiate between upper and lowercase. 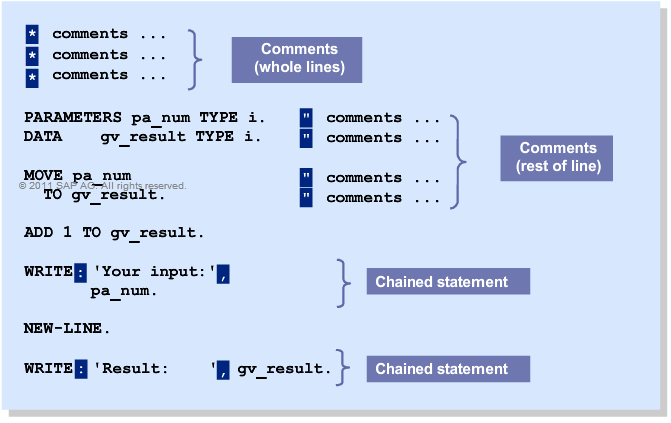 You have to keep in mind certain rules for ABAP syntax:

Statements can extend beyond one line.

You can have several statements in a single line (though this is not recommended).

Lines that begin with an asterisk (*) in the first column are comment lines (whole lines) and are ignored by the ABAP runtime system.

Double quotations marks (") indicate that the remainder of a line is a comment.


KEYWORD DOCUMENTATION IN THE ABAP EDITOR 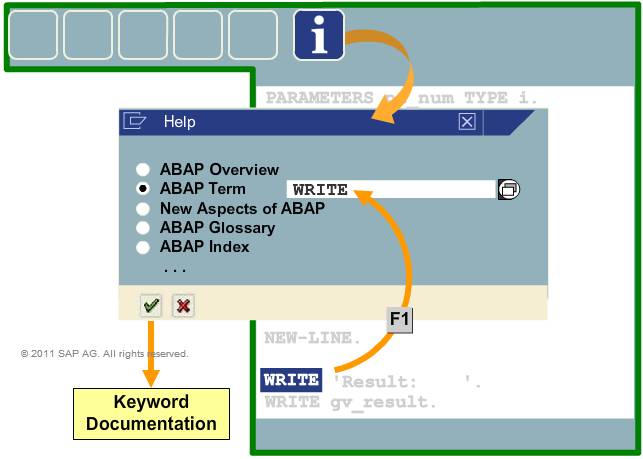 You can use more than one method to navigate to the documentation for an ABAP statement:

The F1 key takes you directly to the documentation for the statement on which the cursor is positioned.

The “I” icon with the description Help on … takes you to a dialog box where you can enter the required ABAP statement. 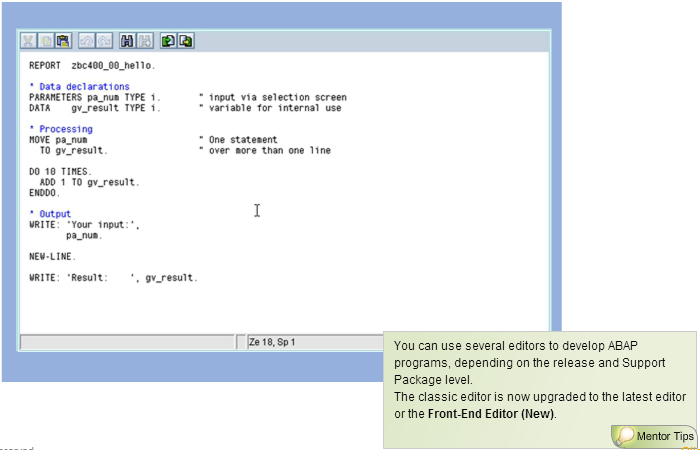 The previous ABAP editor is known as the classic editor or the Front-End Editor (Old). 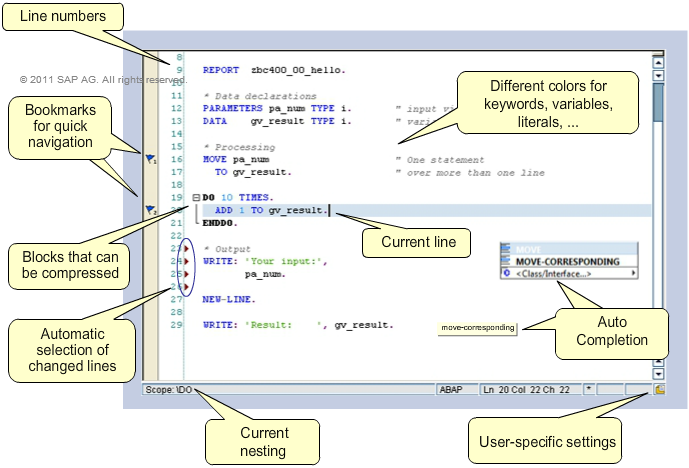 The New ABAP Editor was developed for SAP NetWeaver 7.0.
The new editor provides a number of important options:

Different objects in the source code can have different display colors.

You can set fonts and font sizes for each individual user.

A better overview is possible if blocks of source code (loops and conditional branches) are compressed for display.

You can use bookmarks to find relevant points in the source code faster.

The display of line numbers and the current nesting facilitates improved orientation.

Once you have typed a few characters, the editor automatically suggests complete words for ABAP keywords and data objects. This considerably reduces the actual amount of typing required.

When pressing STRG + SPACE together, the new editor generates a small dropdown list menu with suggestions suitable for the current cursor position (AS ABAP 7.02). 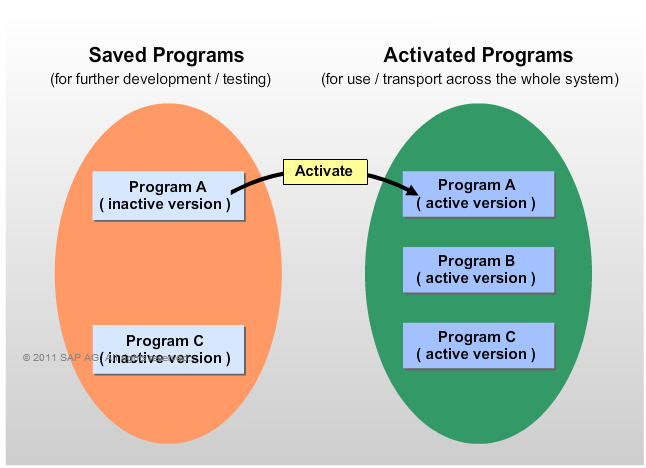 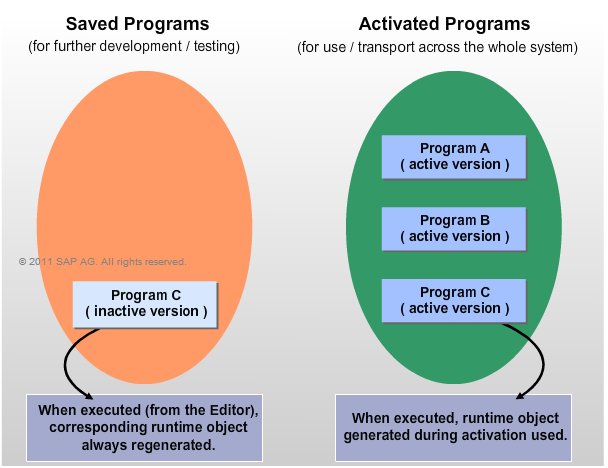 When you generate a development object, the system creates a separate runtime object (LOAD compilation) and stores it in the Repository. This generated version is the version that is executed (interpreted) at runtime.
You can execute the inactive and the active versions of a program in more than one way:
The active version is used if you start your program using the context menu of the navigation area or by means of a transaction. This means that the LOAD generated for the last activation is executed.
Conversely, if you start the inactive version loaded to the editor using the F8 function, you can generate and execute a temporary runtime object from it.
This way you can continue to develop a Repository object without changing the current system status. 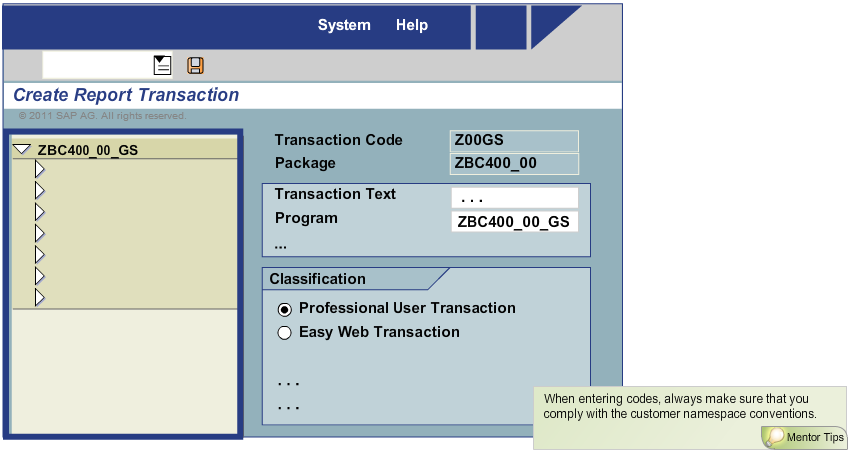 Creating a transaction involves a series of consecutive steps:

Display the object list for your program in the Object Navigator.

In the navigation area, using the context menu of the program, choose Create →Transaction.

On the next screen, enter the name of the program and choose Professional User Transaction.

Set the indicator SAP GUI for Windows under GUI enabled.

As each transaction is a Repository object, you must assign it to a package and then to a change request on the subsequent screens.


INSERTING A TRANSACTION CODE INTO THE PERSONAL FAVORITES 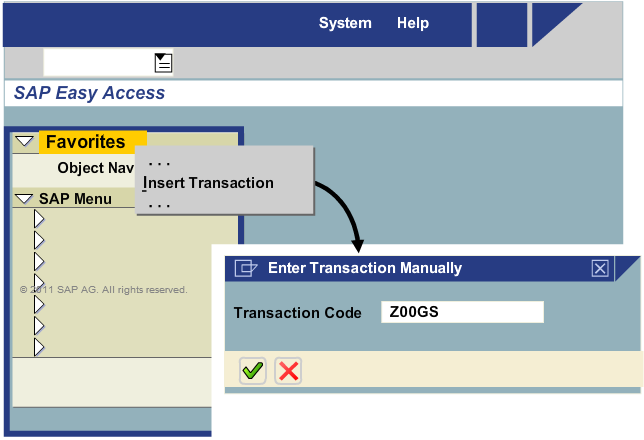 In the SAP Easy Access menu, choose Favorites.
In the resulting context menu, choose Insert Transaction.
The dialog box Enter Transaction Manually is displayed.
Enter the required transaction code in this dialog box.
The short text of the transaction is now included under Favorites and you can start the relevant program by double-clicking it. 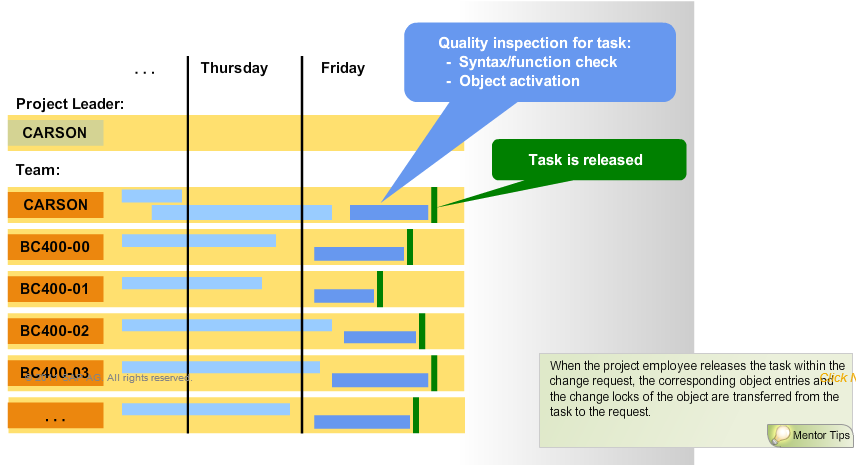 
CLOSING THE PROJECT BY RELEASING THE REQUEST (PROJECT MANAGER) 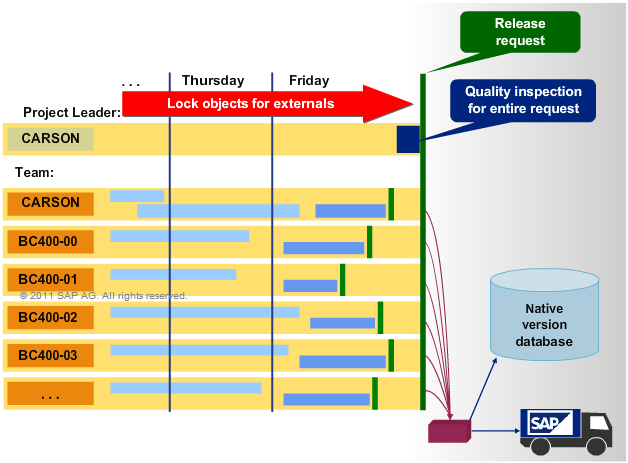 When the request is released

all the object locks that belong to it are removed;

copies of the developed objects are exported to the system’s own transport directory (where they stay until the system administrator imports them to their intended target system); and

another copy of the exported development objects is stored in the system’s own version database.
Posted by Fachreza R at 9:55 PM