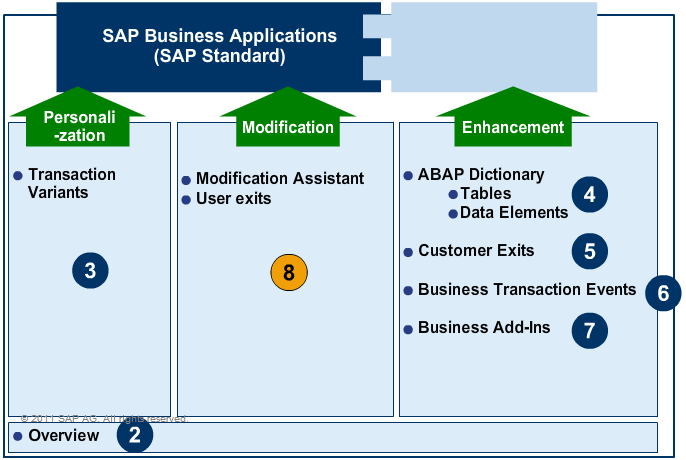 This slide illustrates that Modification is an integral part of the standard SAP applications. It also shows Modification Assistant and user exits. 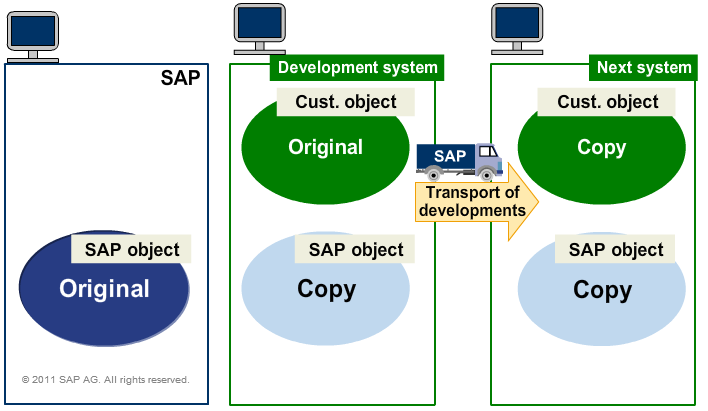 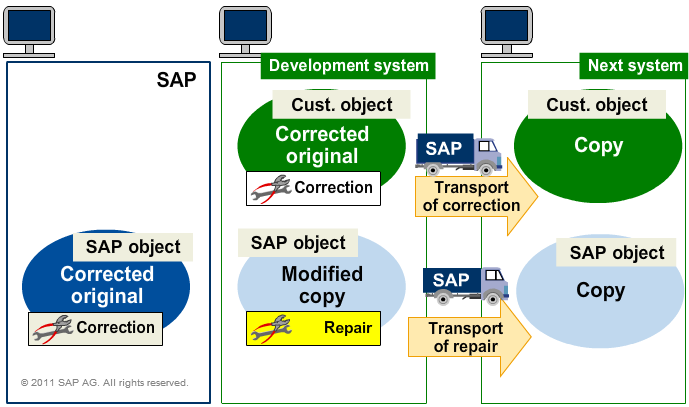 Changes made to an original are called corrections. All the changes done are recorded in a change request whose tasks have the type Development or correction. The changes done to a copy are termed as repairs. These changes are recorded in a task with the type Repair. The repairs to SAP objects are known as modifications. These terminologies are also applicable to any other object created in a development system. 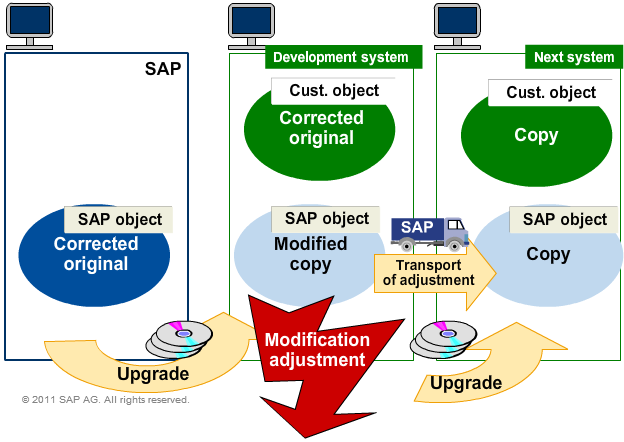 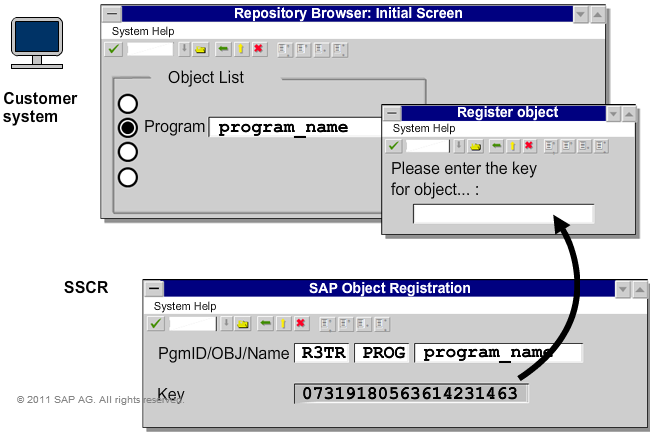 It is important that all the changes made to objects in customer system are registered. This requires a SSCR Key. Any changes done to the objects at a later stage would not require generation of a new key.

CARRYING OUT A REGISTERED MODIFICATION 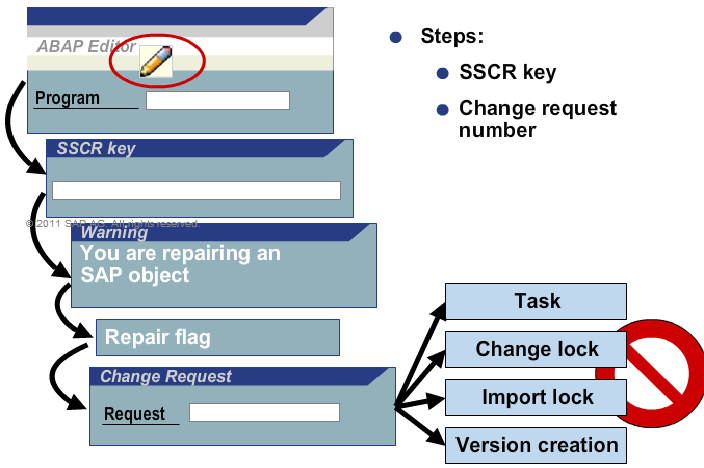 You must provide the Workbench Organizer with SSCR key and a change request to make any changes to SAP Repository objects. Additionally, you need to confirm the warning dialogs that appear while making changes.
A change request performs various functions :
Task
Change lock
Import lock
Version created.

WHEN THE MODIFICATION IS FINISHED 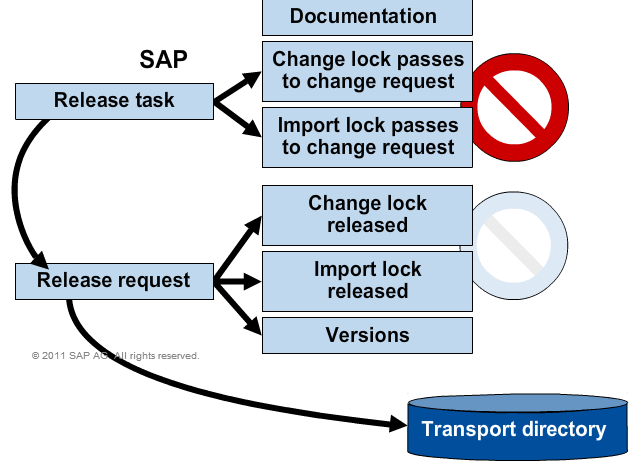 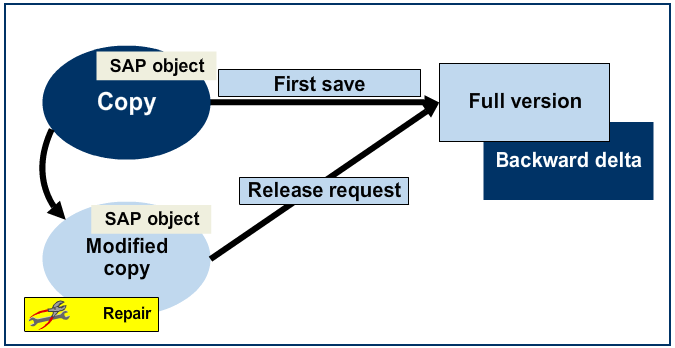 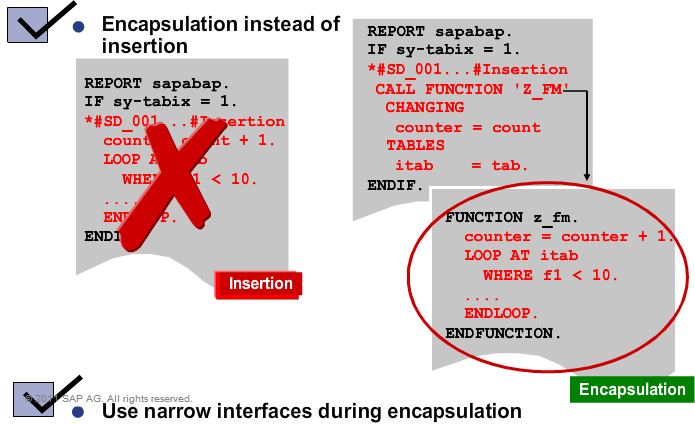 The customer source code should be encapsulated in modularization units instead of being inserted directly into SAP source code. In addition, you should use narrow interfaces to encapsulate customer-specific functions for good data control.

Ensuring not to delete any SAP source code = 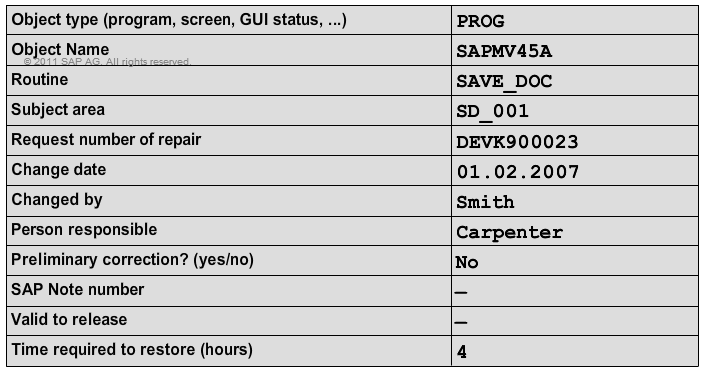 All modifications done to your system should be recorded. In the template shown here, you must provide information for these columns :

Subject area (according to process design blueprint or technical design)

Estimated time to restore the modification during the adjustment

The purpose of the Modification Assistant is to simplify modification adjustments.
Modification assistant provides a finer granularity than possible otherwise. This is because modifications can be done at subroutine or module level. Modifications are registered in a separate software layer.

HOW THE MODIFICATION ASSISTANT WORKS

The changes done in modifications are recorded in a separate layer, which ensures that the original source code of the object remains unchanged. The modifications are not accepted, until the load is generated.

MODIFICATION ADJUSTMENTS THEN AND NOW

Previously, whenever a new version of an include program modified by the user was provided by SAP, modification adjustment was necessary. Each modification had to be manually included in the new SAP version.
Now, using Modification Assistant, modifications can be recorded even at subroutine or function module level.

The software layer present at the customer site is a combination of both the originals provided by SAP as well as present modifications. 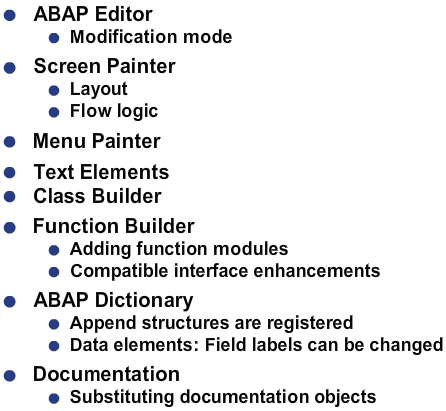 This slide lists the tools supported by the Modification Assistant. 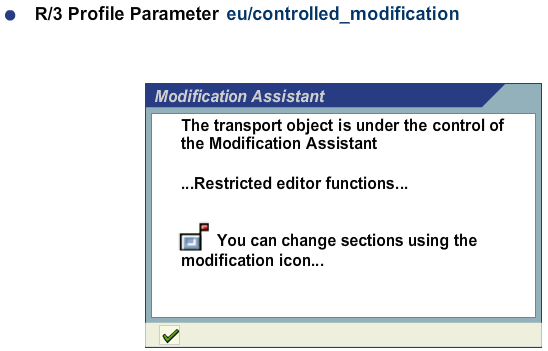 Modification Assistant can be turned on or off for the entire system using the profile parameter eu/controlled_modification. The user must provide SSCR key and change request to change an SAP object.

The system then displays a dialog box informing that the object is under control of the Modification Assistant. 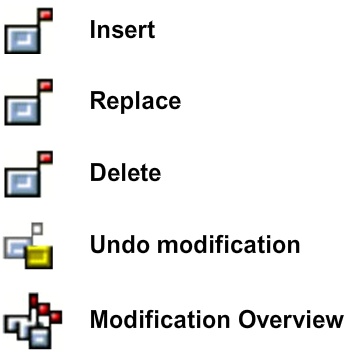 You cannot use all the typical functions of the tool you are working with during modifications. However, these functions can be accessed using appropriate pushbuttons such as insert, replace, delete, undo modification, and modification view. 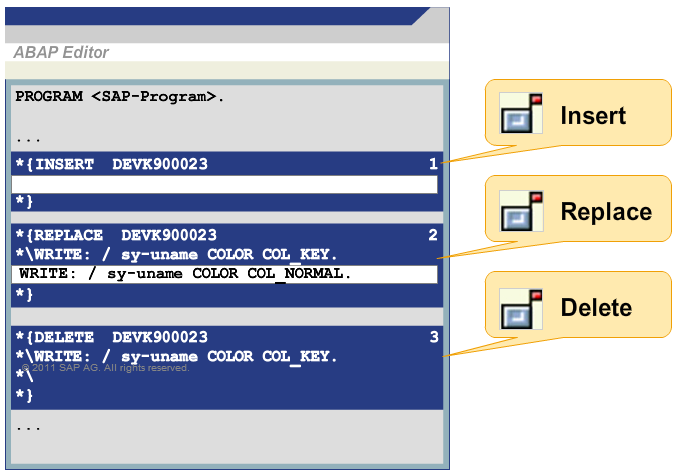 This slide shows the use of pushbuttons during modification.
When the user clicks insert, a new block of code is provided for the user as shown here. On replace, the already existing code is commented and a new code can be inserted. Using delete, the original source code is commented. 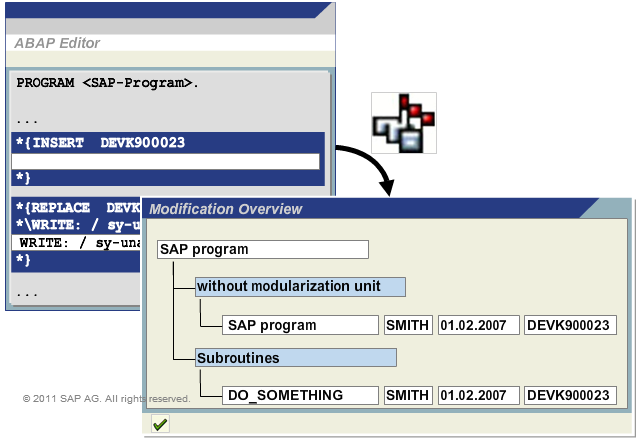 The modification overview icon displays an overview of the modifications done in the current program. Such changes are displayed for all the various modularization units involved. 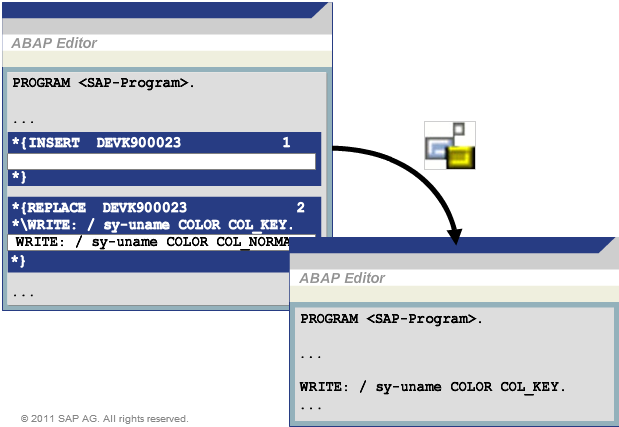 All the changes made during modification can be undone if the user selects the Undo button. It deletes the modification record, which cannot be restored later. 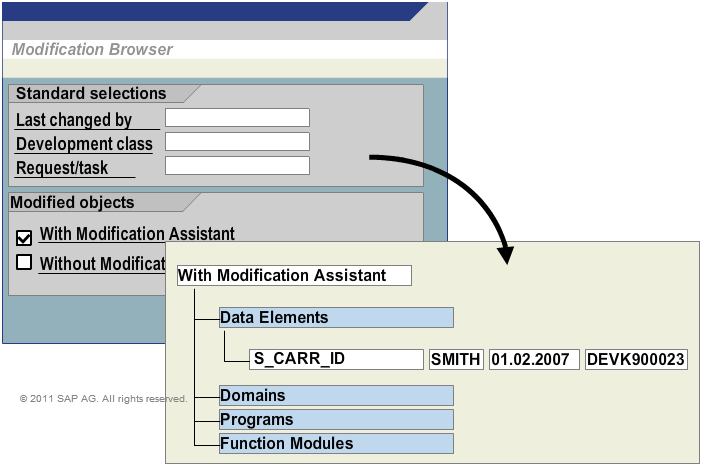 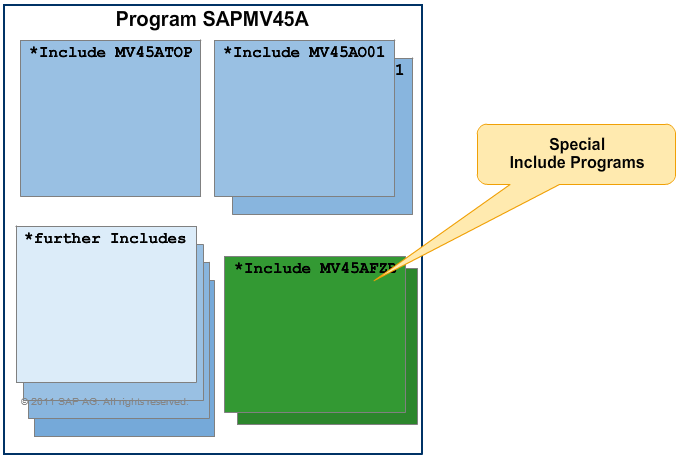 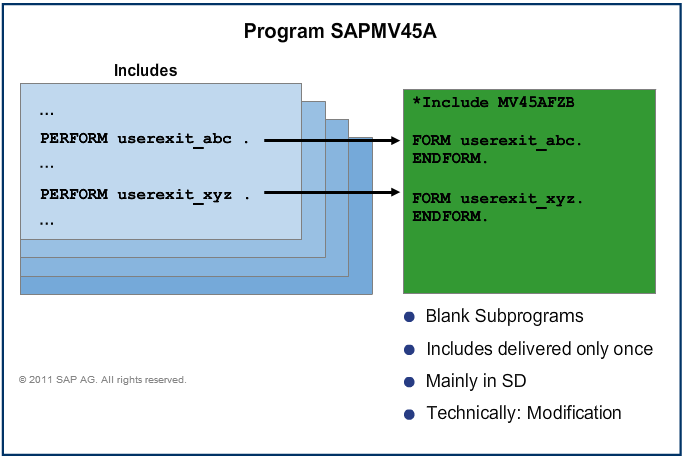 The source code for user exit is declared using sub routines in include programs. An Include can contain any number of sub routines as shown here. Initially these includes are empty and are delivered only once per release. The user exits are especially developed for SD module. Their main purpose is to simplify the process of modifications adjustments. 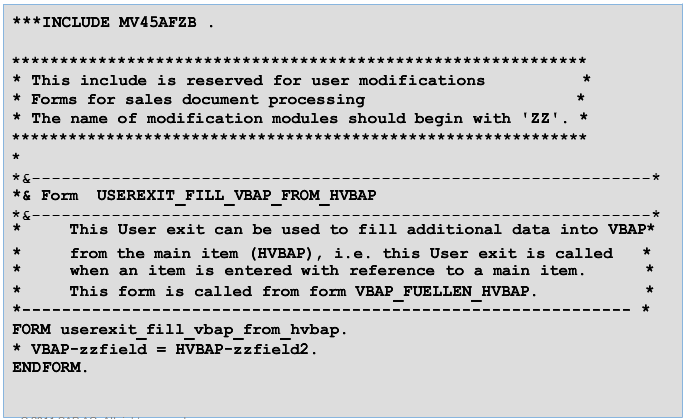 As shown in this slide, user exits are actually delivered as empty subroutines. As a user, you can specify your own source code inside these subroutines. 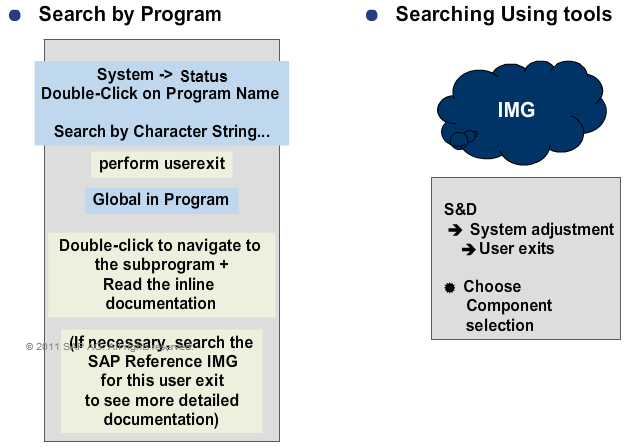 You can search for a user exit by following the menu path: System → Status → Double Click on Program Name → Search By Character String user exit’.
This procedure provides you with the required documentation for the user exit.
You can also conduct similar search in IMG: In SD, go to System adjustment → User exits and choose Complete Selection. 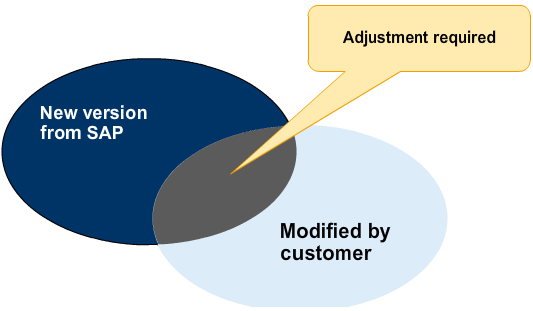 Whenever SAP delivers a new version, the set of objects modified by the customer are compared with the delivered ones. The set of objects common to both are the ones that require adjustment. 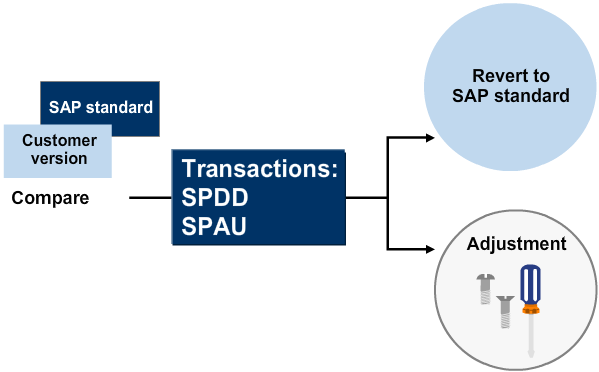 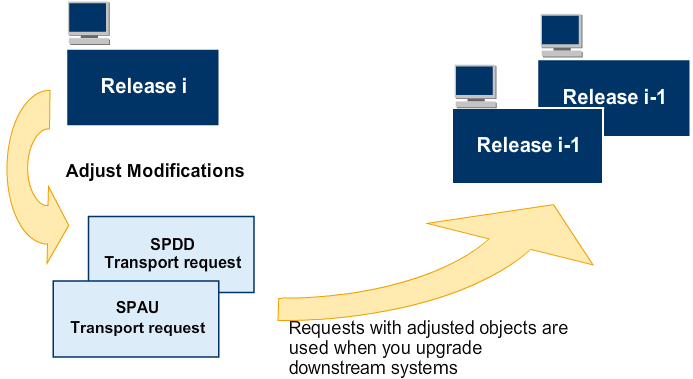 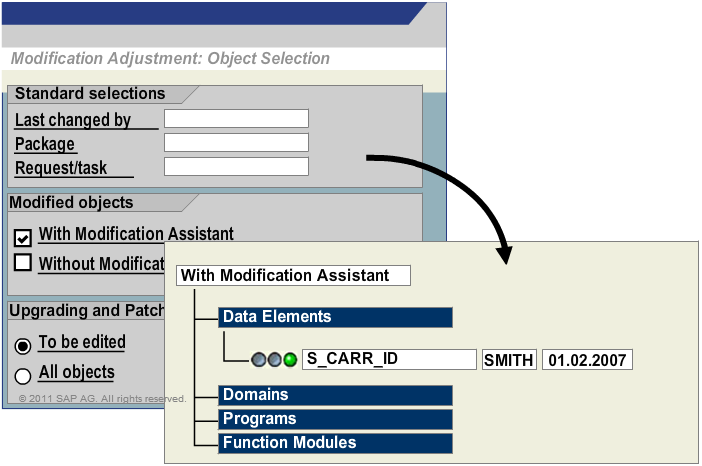 The hit list, which is displayed on a selection screen at the beginning of modification adjustment, can be restricted. The hit list can be displayed on the basis of objects that are to be adjusted or that are yet to be processed. 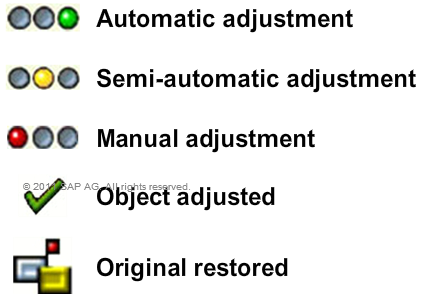 The modification assistant icons are displayed against objects that need adjustment. There are various possible ways of making adjustments:

If you choose automatic adjustments, the changes are adopted automatically by choosing the appropriate icon or menu option.

If you select semiautomatic adjustments, you can make use of the individual tools for this purpose. During adjustments you can use the Split Screen Editor to make any changes.

If you opt for manual adjustment, the modification adjustment is done without any special support from the system.

Adjusted objects are marked by a green tick.

If you want to use the new SAP standard version, you should use original restored button.
Posted by Fachreza R at 12:10 AM