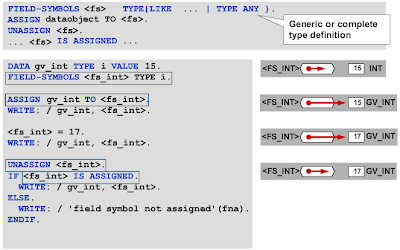 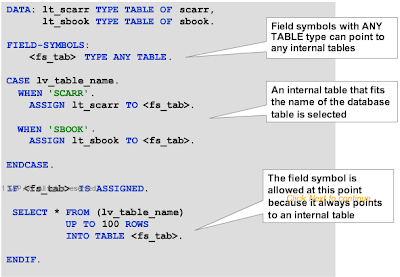 If a field symbol is typed generically, it can be assigned to any data object irrespective of the type of data object. In this example,<fs_tab> is a field symbol of type internal table. Depending on the parameter supplied to the variable, lv_table_name, <fs_tab> should hold values from SCARR or SBOOK table. The SELECT statement is used to fill the internal table using <fs_tab>. 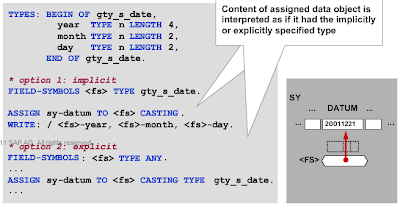 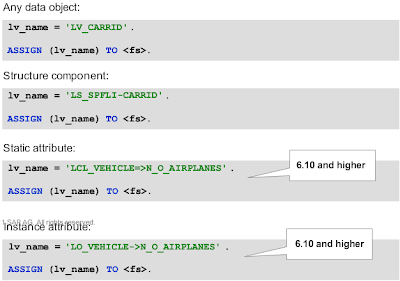 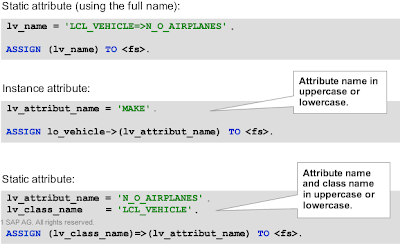 Like data objects or structure components, dynamic access to the static attributes of a class or an instance of a class, can be made using field symbols, as shown here. The attribute name can be specified either in uppercase or lowercase. Even a class name can be mentioned either ways. 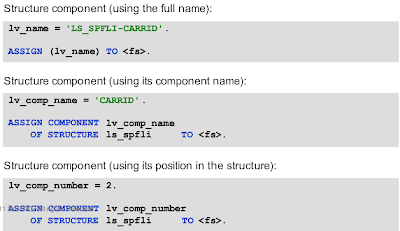 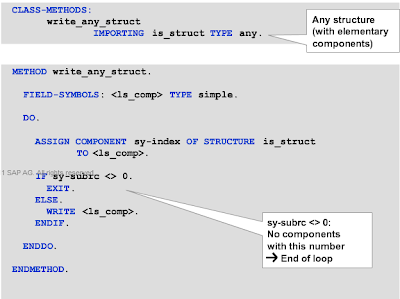 The components of a structure can be accessed using its field symbols. Let us understand this with the example shown in the slide. The variable, is_struct, is an elementary structure declared as TYPE any. The system variable, sy-index, is used to assign the components of the structure to the field symbol, ls_comp.
The condition sy-subrc <> 0 (not equal to zero) checks the ASSIGN statement. If the condition is true, control exits the loop. Otherwise, the index value is displayed using the WRITE statement. 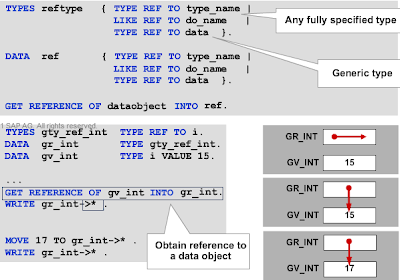 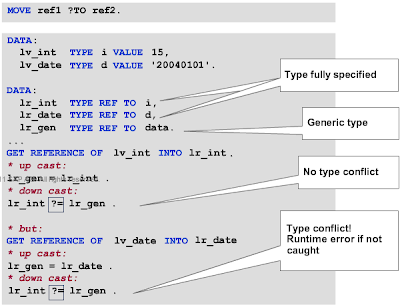 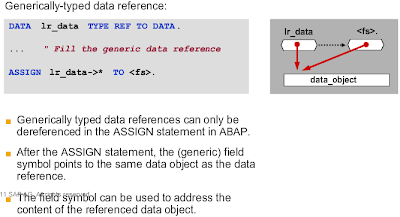 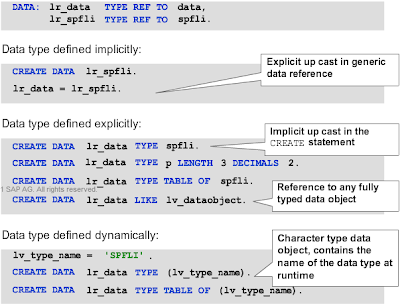 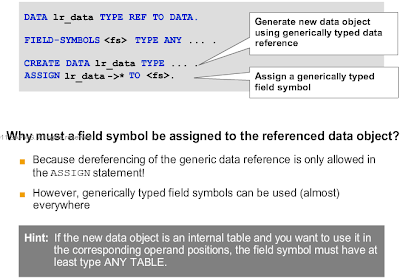 As shown in the slide, CREATE DATA lr_data creates a data object whose type is unknown. Therefore, in case of dynamically created data objects, reference variable should be generic in nature. Using the ASSIGN statement, the field symbol <fs> points to the content of the data object, lr_data.
A field symbol is required in this case because

Only the ASSIGN statement can be used to dereference a reference variable. 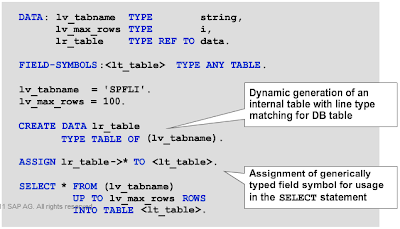 An internal table can be created dynamically using the TYPE TABLE OF addition in the CREATE DATA statement. The line type of the internal table is defined by specifying the name of the table in parentheses, as shown in the slide. In order to display the values, you can use a generically typed field symbol in the ASSIGN statement. 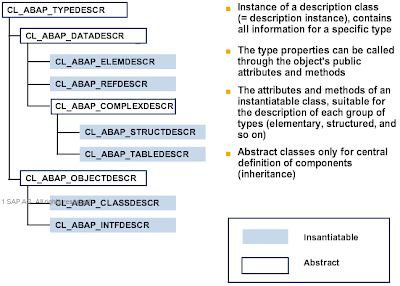 ABAP defines a hierarchical list of global classes that can be used. An instance of the class describes all the properties associated with the class which can be called using the public attributes and methods. Each class describes a specific category of types, for example CL_ABAP_TABLEDESCR is used to describe table types. The list is a combination of abstract classes used for inheritance, as well as those classes which can be instantiated. 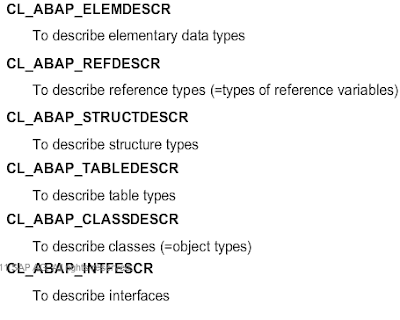 RTTI: METHOD AND ATTRIBUTES OF THE ROOT CLASS 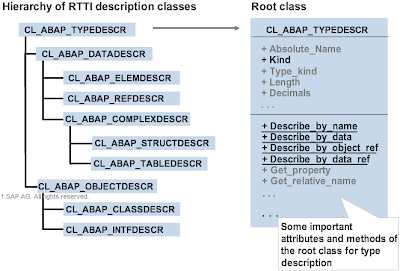 CL_ABAP_TYPEDESCR is the root class in the hierarchy of RTTI description classes. CREATE OBJECT cannot be used to instantiate class directly. As shown in the slide, you need to call the static methods, Describe_By_name and Describe_By_data of class CL_ABAP_TYPEDESCR to create an object reference.


DESCRIBING A TYPE BASED ON ITS NAME 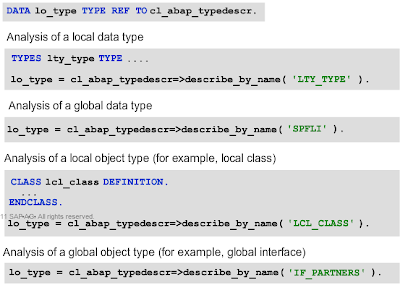 In order to access the attributes and methods of the respective type, you need to suitably cast the subclass with local or global data type. It is also possible to cast interfaces to the data objects.

CASING A SUITABLE REFERENCE FOR A TYPE DESCRIPTION OBJECT 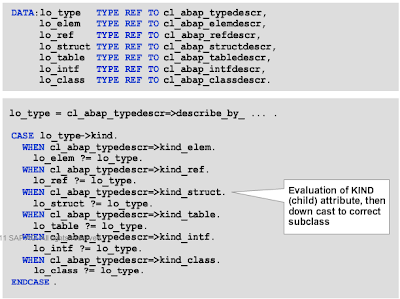 If the user has no idea about the RTTI class that was instantiated, then the public instance attribute, kind, can be used. However, a downcast to a suitable subclass must be done.

DESCRIBING TYPES BASED ON DATA OBJECTS AND REFERENCES 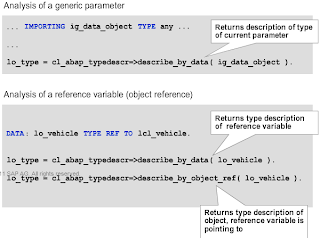 ANALYSIS OF AN ELEMENTARY DATA TYPE All the properties of an elementary data type can be accessed using the RTTI class, CL_ABAP_ELEMDESCR. Technical properties, such as type, length, and decimal places are defined in the respective public attributes. The public attribute, Type_kind, stores constants, which must be evaluated against the corresponding constant for the root class. The method, Get_DDIC_field, returns the structure with dictionary information for the data element.

ANALYSIS OF THE TYPE OF A REFERENCE VARIABLE 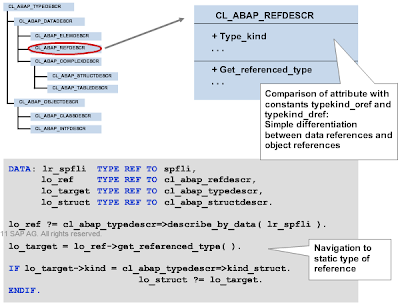 The RTTI class, CL_ABAP_REFDESCR, can be used to obtain the type of a reference variable. The inherited public attribute differentiates between data references and object references. The method, get_referenced_type, is used to describe the details of the static type of the reference variable.

ANALYSIS OF A STRUCTURE TYPE 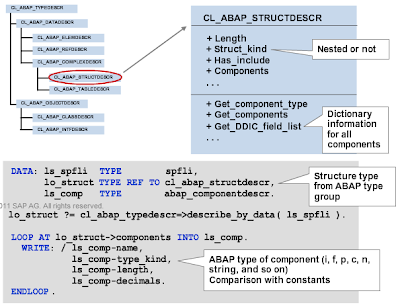 The class, CL_ABAP_STRUCTDESCR, is used to determine the structure of the reference variable at runtime. It contains public attributes, such as Length, Struct_Kind, Has_include, and Components. The attribute, struct_kind, determines whether the structure is nested or elementary. Similarly, the Components attribute is an internal table, which contains the names of all components and their technical properties. The method, Get_DDIC_field_list, describes the semantic information of all the components. 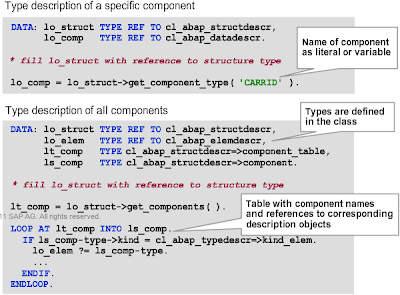 As shown in the slide, the method, get_componenet_type, returns the description object for the specified component. The type of reference variable, lo_elem, is identified by the class cl_abap_elemdescr. Using the variable, ls_comp, in the LOOP AT statement, description objects for all the components of the structure can be obtained.


ANALYSIS OF A TABLE TYPE 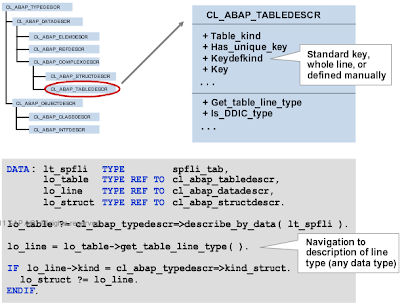 The RTTI class, CL_ABAP_TABLEDESCR, is used to determine the table type of the reference variable at runtime. Its public attributes contain information, such as whether the internal table is standard or sorted; and whether it has a unique key. The method, get_table_line_type, can be used to get the line type of the description object.

ANALYSIS OF AN OBJECT TYPE 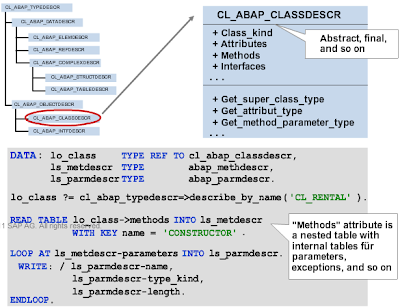 The public attributes of class CL_ABAP_CLASSDESCR contain information about attributes, methods, and interfaces of the described class. The attribute, Class_kind, determines if the class is declared as abstract or final. The Methods attribute is defined as a nested internal table, which contains parameters and exceptions for the respective method.
Posted by Fachreza R at 11:27 PM